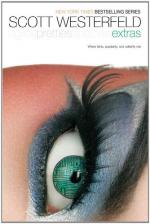 Extras by Scott Westerfeld is the fourth book in the Uglies Series. In this book, Aya is the younger sister of a highly successful kicker who wants to come up with a face changing kick of her own. When Aya sees a group of girls surfing the super-fast mag-lev trains, she infiltrates their group in order to kick their story. Instead, Aya stumbles across a story that is far bigger than mag-lev train surfers that will change not only her life, but will bring her face to face with the most famous person in the world, Tally Youngblood. Extras is a post script to the Uglies series that shows readers changes that have happened throughout the world since the mind-rain that fell in the final book of the trilogy.

Aya lives in a city in Japan where currency is based on a person's face rank. Aya's brother, Hiro, is a successful kicker, a reporter of sorts, who has a high face rank. Aya's face rank is just below half a million, making her an obscure extra. Aya wants to find a hot story to kick that will raise her face rank up closer to her brother's level. To this end, Aya seeks out a group of girls known as the Sly Girls who she saw surfing mag-lev trains, the super-fast trains that transport goods from city to city. The Sly Girls take Aya in, but only after she allows them to drop her hovercam into a reservoir to prove she is not interested in kicking them.

Aya uses spy cams and her rescued hovercam to make videos of the Sly Girls without their knowledge. Aya cannot understand how anyone could not want to have their face rank raised and thinks the Sly Girls will eventually appreciate her kicking their story and making them famous. That is, until Aya and the Sly Girls happen onto something strange in a mag-lev train tunnel.

Aya's first time mag-lev train surfing with the Sly Girls, the train stops inside a tunnel and strange looking creatures open a door hidden by smart matter. A few days later, Aya returns with the Sly Girls where they find hundreds of metallic cylinders in a large room beside what Aya later learns is a mass driver. Aya comes to the conclusion that the cylinders are missiles designed to destroy whole cities. A short time later, the Sly Girls learn of Aya's deception, but they give her a chance to prove her theory before cutting her out of the group and disappearing.

When Aya kicks the story about the City Killers, she is instantly famous. Aya is overwhelmed by the attention, but what really shocks Aya is when she gets a ping from Tally Youngblood urging her to hide. Aya, her brother, and two friends hide through the night after nearly being kidnapped by the odd shaped people Aya saw in the train tunnel. Tally Youngblood arrives with two friends and begins to take Aya out of town. However, the strange shaped people follow them and Tally allows them to capture the entire group. Later, on the strange creatures' hovercar, Tally explains that his is the only way she and her friends could find to infiltrate the camp of the strange creatures who previously kidnapped a friend of Tally's.

As the hovercar approaches the city, violence breaks out. Tally, Aya, and the rest of their friends are forced to jump from the hovercar. Tally reunites with her friends and goes in search of her kidnapped friend. Aya, her brother, and friend Frizz go after Tally in order to capture the end of their story. Instead, they learn that the strange creatures are simply attempting to establish a colony in space in order to protect the earth's natural resources. Aya tells Tally and stops her from destroying the spaceships that were made for this purpose.