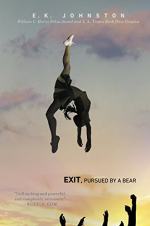 Exit, Pursued by a Bear Summary & Study Guide includes comprehensive information and analysis to help you understand the book. This study guide contains the following sections:

This detailed literature summary also contains Quotes and a Free Quiz on Exit, Pursued by a Bear by E.K. Johnston.

The novel is written in first person, present tense narration, a stylistic choice that draws the reader closely and intimately into the situation and experiences of the central character.

The narrative begins with a brief prologue, in which protagonist Hermione describes her encounter with a minister whom she asks to stop soliciting prayers on her behalf.

Part One begins with a description of Hermione’s arrival at a summer cheerleading camp in the company of her friends and teammates. At the end of two weeks, after she and the others on her team (including best friend Polly and boyfriend Leo) have gone through a rigorous training program, Hermione cuts loose at a camp dance, where she drinks a cup of punch. Shortly afterwards, she finds herself feeling unwell, realizes she is being led from the hall where the dance is taking place, and loses consciousness.

Part Two begins in the immediate aftermath following what is revealed to have been a sexual assault. Hermione wakes up in a hospital and is given several difficult pieces of information. She learns that she was drugged and raped, and she learns that because of the circumstances in which she was found (i.e. her lower body submerged in the lake near the camp), there is little physical evidence that the police can use as evidence in their investigation. She also learns that there is a possibility that additional physical evidence can be uncovered if she turns out to be pregnant as a result of the assault, but that it is not advisable for her to take a pregnancy test until at least two weeks later. With all that knowledge, Hermione first returns home, and then returns to school determined to not let what happened to her derail her plans for a successful final year as a cheerleader and the rest of her plans for her future. Eventually, however, she learns that she is indeed pregnant, and immediately resolves to have an abortion. She is supported by her friends, family, and psycho-therapist, as well as by the minister she encountered in the Prologue (at one point, the action of Part Two narrates the before and after of the Prologue sequence). Part Two concludes with a discreet, matter-of-fact description of Hermione’s abortion.

With Part Three, Hermione’s plans to rebuild her life take primary focus. The DNA test taken with tissue removed from her body during the abortion proves inconclusive, so part of Hermione’s recovery involves making peace with the possibility that she will never know who raped her, and that whoever it was will never face justice for what was done. Meanwhile, she learns new truths about Polly (who comes out as a lesbian); about Leo (who has consistently maintained that Hermione deserved what happened to her); and about herself, becoming aware of new resources of strength. That strength is challenged when she learns that the national cheerleading competition, for which her team is likely to be selected, is to be held at the camp where she experienced being raped.

In Part Four, Hermione’s team wins the provincial competition and prepares for nationals. Meanwhile, Hermione discovers that she can feel safe while being touched by a male, which she had feared she would not be in the aftermath of her rape. Upon her arrival at the camp, she at first has a difficult time with the memories overwhelming her, but with the help of her friends eventually pulls herself together enough to lead her team to a championship performance. In the aftermath of that performance, she recognizes the boy who raped her, and manages to collect a DNA sample that, she and Polly believe, will help prove him guilty. After the sample is collected by a friendly police officer, Hermione promises herself that her life will be remembered for more than her having been raped.

Exit, Pursued by a Bear from BookRags. (c)2022 BookRags, Inc. All rights reserved.