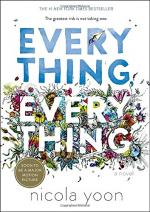 Related Topics
The Sun Is Also a Star
Instructions For Dancing

Everything, Everything Summary & Study Guide

Nicola Yoon
This Study Guide consists of approximately 70 pages of chapter summaries, quotes, character analysis, themes, and more - everything you need to sharpen your knowledge of Everything, Everything.

Everything, Everything Summary & Study Guide Description

Everything, Everything Summary & Study Guide includes comprehensive information and analysis to help you understand the book. This study guide contains the following sections:

This detailed literature summary also contains Quotes and a Free Quiz on Everything, Everything by Nicola Yoon.

The following version of the novel was used to create this study guide: Loon, Nicola. Everything, Everything. Delacorte Press, 2015. Kindle.

Love is worth everything, eighteen-year-old Madeline sums up the novel The Little Prince in the book Everything, Everything by Nicola Loon. Madeline, like the main character in her favorite novel, decides to follow her heart even though it means she might lose her own life. She suffers with SCID, a rare condition characterized by a nearly nonexistent immune system, and has lived all of her life inside a controlled, sterile environment. When she has the chance to experience love, however, Madeline decides a chance at being alive is worth the risk she must take.

Having lived more than seventeen years inside her home, Madeline believes that she has come to terms with her illness. She has taught herself to live her life through books and stay busy with her school work. Dreaming of life outside will only cause her to be depressed by what she cannot have and cannot do, so Madeline has learned to ignore the outside. Her satisfaction with her secluded life is destroyed one day when a teenaged boy moves in next door. Oliver, called Olly, makes several attempts at friendship with Madeline before they begin communicating through email.

With the help of Madeline’s permissive nurse, the two begin having short visits face-to-face in Madeline’s home. They quickly fall in love and the rule not to touch one another is disregarded. Touching leads to kissing and the two are soon enamored with one another. It is after Madeline hears Olly’s father abusing him and runs outside to protect Olly without thinking that her overly protective mother learns about the visits. Madeline’s mother forbids her from seeing Olly again in person or even talking to him through email or IM.

Unable to go back to her life the way it was, Madeline decides she wants to take a chance at really being alive even if it means that she may die. She and Olly take a trip to Hawaii where they snorkel, jump off a cliff into the ocean and enjoy Hawaiian food. They profess their love to each other both verbally and physically. The second day of their trip, however, Madeline wakes up with a raging fever and her heart stops. She is taken to a hospital in Hawaii where she is revived.

A few months later, Madeline, who is trying to convince herself that she can go back to a life of seclusion after she has experienced the world, gets an email from the doctor who treated her in Hawaii. This doctor has conducted a good deal of research into Madeline’s case and believes Madeline does not suffer with SCID. Madeline sees a local SCID specialist and it is confirmed. Madeline’s mother had invented Madeline’s disease after she lost her husband and son in a car wreck. Because Madeline had been so sick as an infant, her mother believed keeping her in a sterile environment was the only way to protect her. Because Madeline’s mother was a doctor and oversaw her daughter’s care, no one had the opportunity to question the diagnosis until Madeline was treated by the doctor in Hawaii.

Madeline struggles to understand why her mother thought she was doing what was best for her by keeping her isolated from the world. Hoping to be able to repair her relationship with Olly, Madeline flies to see him in New York where his family moved to escape his abusive father. She arranges to meet him in a used book store where she has left a copy of the book The Little Prince. That book offers herself as a reward if it is found. Olly recognizes the book and smiles.

More summaries and resources for teaching or studying Everything, Everything.

Everything, Everything from BookRags. (c)2022 BookRags, Inc. All rights reserved.