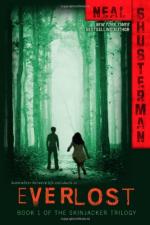 Neal Shusterman
This Study Guide consists of approximately 36 pages of chapter summaries, quotes, character analysis, themes, and more - everything you need to sharpen your knowledge of Everlost.

This detailed literature summary also contains Topics for Discussion and a Free Quiz on Everlost by Neal Shusterman.

Nick and Allie are traveling with their families when the car Nick's father is driving strikes a piece of metal in the road, causing Nick's father to lose control. Nick is in the middle in the back seat and does not have a seat belt. They collide head-on with the car Allie is riding in. Allie has just unbuckled her seat belt to adjust her blouse. The two children fly through the windshields of their cars and are headed down a tunnel toward a light but bump into each other, effectively stopping their journey. A young boy finds them and waits nine months for them to wake. He doesn't remember his name and Allie calls him Leif. Leif slowly helps Nick and Allie realize they are dead. Leif himself died in a flood.

Allie is determined to go to her home. She realizes her father might have died in the wreck but believes the rest of her family will be there, waiting for her. Leif tries to convince them it's not safe outside the forest. The forest is a dead spot and they are able to walk about without any problem in any dead spot. But in the world of the living, the dead are pulled all the way to the center of the earth. Leif also warns them about "the McGill," a monster who is a danger to those who have died.

Allie is determined to go anyway and sets out with Nick. They are soon set upon by a group of rogue boys who threaten to throw Nick and Allie to the center of the earth. Allie bluffs, saying she knows the McGill and can summon him. The boys hesitate but then call Allie's bluff. Just then, Leif comes running from the woods, frightening the boys away and cementing his friendship with Allie and Nick. Leif follows them as they arrive in New York city and discover the Twin Towers is home to a girl who is an expert on dead children, Mary Hightower. Though the Twin Towers is not real, it exists on its former site and is filled with children.

Allie soon discovers the children who live in the towers are caught in a rut, repeating a routine day after day. Nick, meanwhile, is enamored with Mary while Leif spends all his time playing a video game. Eventually, Allie convinces Leif and Nick to leave with her but they're captured, first by the Haunter and then by the McGill. By the time Allie and the others escape from the McGill, Nick has come to realize there's a way for children to cross over. All children arrive with a coin in their pockets, even if they didn't have it when they died. By holding a coin, they can make the journey that was interrupted. Once Nick realizes this, he helps more than a thousand children cross over, including those who had lived in the Twin Towers with Mary. Mary vows to rebuild her city and Nick holds onto his coin but finds it cold, indicating he isn't yet ready to cross over himself. He realizes that he still has work to do.

More summaries and resources for teaching or studying Everlost.