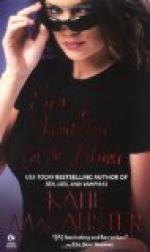 Even Vampires Get the Blues Summary & Study Guide

Katie MacAlister
This Study Guide consists of approximately 23 pages of chapter summaries, quotes, character analysis, themes, and more - everything you need to sharpen your knowledge of Even Vampires Get the Blues.

Even Vampires Get the Blues Summary & Study Guide Description

Even Vampires Get the Blues Summary & Study Guide includes comprehensive information and analysis to help you understand the book. This study guide contains the following sections:

This detailed literature summary also contains Topics for Discussion on Even Vampires Get the Blues by Katie MacAlister.

Even Vampires Get the Blues is a novel by writer Katie MacAlister. In this novel, vampire Paen Scott has five days to find an ancient monkey statue in order to save his mother's soul. To help him find the statue, Paen hires Sam Cosse, a woman who is half human and half elf. As they search for the elusive statue, Paen and Sam discover a mutual attraction for one another. However, Paen is determined not to get involved in a committed relationship despite the fact that finding his beloved will allow him to recapture his soul after several lifetimes of living without it. Fortunately for Paen, Sam is not the type to take no for an answer. Even Vampires Get the Blues is a romantic turn on the vampire genre that is both exciting and humorous, leaving the reader rooting for both Sam and Paen despite their own attempts at self-sabotage.

Paen Scott is visited by a demon at his family home in Scotland who tells him that his father once used the services of a demon in exchange for a monkey statue. The demon is now asking for payment of services. However, Paen's father is on an expedition and unreachable. The demon tells Paen he has five days to find the statue and hand it over, or his mother will lose her soul. Due to the fact that Paen has lived his entire life without a soul, he knows how terrible this can be and he vows to do all he can to protect his mother.

Paen hires Sam Cosse, a woman who is half human and half elf, to help him find the statue. Almost immediately Paen and Sam recognize a mutual attraction between them. However, Paen makes it clear that he is not interested in a relationship, he simply wants to share a sexual experience with Sam. Sam agrees to this because she sees it as a challenge, a way of proving to Paen that sex without love is not as great as he thinks it is. However, before they can indulge in their newfound attraction, Sam receives a call from her cousin, Clare, telling her she has been shot.

Paen and Sam rush to where Clare has been watching the final scenes of a movie being filmed. Clare tells them that a man with a monkey accused her of having a statue and shot her for not telling him where it was. Clare, fortunately, is a fairy; therefore she was not injured. Sam speaks to the ghosts in the area where Clare was shot in hopes of getting more information about the shooter, but has no luck. However, when Clare tells Sam the description of the statue the man was looking for, Sam realizes it is a falcon statue that she was given earlier in an antique store.

Over the next few days, Sam continues her search for both the statue and a manuscript another client has asked her to locate. When Sam returns, after a fruitless search, Paen is waiting for her. They return to her apartment and in the middle of an intimate moment, Sam becomes aware of a poltergeist searching her apartment. Paen calls up a guardian who speaks to the poltergeist and learns it was sent there by a demon to find the statue.

The following day, Paen and Sam are on the way to her apartment when she asks him about the steps that bond a beloved and a vampire. Sam makes a joke of it, finishing the steps as they wait in traffic, but nothing happens. When they reach her apartment building, Sam sees a man who is about to shoot Paen with a stake. Sam jumps in the way. When she wakes later, she learns that by sacrificing her life for Paen, she completed the steps and they are now bound to one another. Paen, however, is unhappy with this and attempts to end the relationship.

Sam shows the others the statue and then takes it out of the apartment to show a diviner friend. However, on the way Sam is taken by the same man who tried to kill Paen, Pilar, to the home of a mage expert she met previously. This man tells her he is looking for a monkey statue and he wants her to give it to him, not Paen. As Sam is leaving, Pilar shoves her and she is forced from her body. Paen helps her return, but when she comes back she discovers the statue is gone.

Sam and Paen go in search of Pilar to find the statue. Pilar turns on Sam when they find him and cuts her throat. Paen turns Sam into a vampire to save her life, but this causes her to lose her soul. For this reason, Paen insists they must find the manuscript Sam's other client is searching for because it will tell them how to save her soul. However, Sam insists they find the statue first. To this end, they track down Pilar again. They learn that Pilar is the monkey god the statue depicts and that he needs the statue to kill the demon god, Yan Luowang.

After Sam gets the statue back from the beyond, a battle ensues between Yan Luowang and Pilar. The statue is broken, but Sam manages to return its pieces to Yan Luowang, satisfying the deal Paen's father made with him. However, Yan Luowang is then sent back to hell and he takes with him the manuscript Sam needs to save her soul. Pilar, however, rewards Sam for saving his life by helping her restore her soul.

More summaries and resources for teaching or studying Even Vampires Get the Blues.

Even Vampires Get the Blues from Gale. ©2005-2006 Thomson Gale, a part of the Thomson Corporation. All rights reserved.