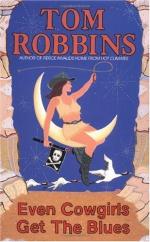 Even Cowgirls Get the Blues Summary & Study Guide

Tom Robbins
This Study Guide consists of approximately 40 pages of chapter summaries, quotes, character analysis, themes, and more - everything you need to sharpen your knowledge of Even Cowgirls Get the Blues.

Even Cowgirls Get the Blues Summary & Study Guide Description

Even Cowgirls Get the Blues Summary & Study Guide includes comprehensive information and analysis to help you understand the book. This study guide contains the following sections:

This detailed literature summary also contains Related Titles and a Free Quiz on Even Cowgirls Get the Blues by Tom Robbins.

Even Cowgirls Get the Blues is an exploration of freedom and a journey of self discovery. Tim Robbins introduces the reader to Sissy Hankshaw a beautiful woman with abnormally large thumbs. As she hitchhikes across the United States, Sissy learns valuable life lessons that inform her of the person she is destined to become. Robbins tells Sissy's story through a mixture of love, humor, and descriptive language.

Sissy Hankshaw's life begins in South Richmond, VA. There, she is considered to be somewhat of a spectacle. At first her parents and friends cannot get over the size of Sissy's thumbs. They feel sorry for her because they believe she has been dealt a hard hand in life. Sissy, on the other hand, accepts her thumbs. They are what set her apart from everyone else in town. They make her feel alive and vibrant. As Sissy grows, her thumbs grow and yearn to be exercised. This leads Sissy to hitchhike. which, although dangerous, becomes Sissy way out of her small town.

Sissy's thumbs take her all over the United States and she becomes somewhat of a legend along the way. When Sissy finds herself in the Big Apple, she also finds herself under the employ of a gay male billionaire named the Countess. The Countess' business is women - more specifically women's hygiene products. Sissy begins to model for him and is the star of one of his campaigns. The Countess insists upon introducing Sissy to Julian, a full blooded Mohawk Native American artist. Julian and Sissy meet and instantly discover a they have a connection. The two quickly marry.

Unfortunately, Julian does not understand Sissy's love of her thumbs or their need to be exercised. He also refuses to acknowledge his heritage, which Sissy wishes he would embrace. The marriage quickly becomes rocky, so Sissy decides to leave for the Dakotas on a business trip. The Countess has asked Sissy to go to the Rubber Rose Ranch to check on the cowgirls that are overtaking it.

Once Sissy arrives, she is thrust into a conflict between the cowgirls and the leaders of the ranch. The cowgirls are fighting for their rights to be cowgirls and also to end the oppression of women. Sissy quickly falls in lust with the leader, Bonanza Jelly Bean. The two women connect in a way Sissy never expected. Before they can get to know each other any better, chaos breaks out on the ranch and Sissy flees to the hills. It is there that she meets the Chink, a Japanese man. Sissy spends a couple a weeks with the Chink during which she learns much about herself and the world around her. When Sissy returns home, Julian is not happy that his wife has changed. He sends her to a mental clinic to be "fixed."

Upon leaving the clinic, Sissy decides to return to the ranch because she cannot stand to be with her husband. She is also conflicted over her relationships with Jelly Bean and the Chink. When Sissy returns, the cowgirls are at war with the FBI for kidnapping the endangered Whooping Cranes. As a result, the FBI shoots down the ranch, thus causing the death of Jelly Bean. Once all the smoke has settled, Sissy is renamed the caretaker of the ranch. She and the cowgirls finally have a place where they can be themselves.

More summaries and resources for teaching or studying Even Cowgirls Get the Blues.

Even Cowgirls Get the Blues from Gale. ©2005-2006 Thomson Gale, a part of the Thomson Corporation. All rights reserved.