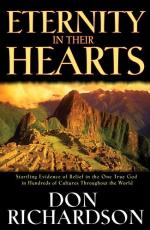 Don Richardson
This Study Guide consists of approximately 28 pages of chapter summaries, quotes, character analysis, themes, and more - everything you need to sharpen your knowledge of Eternity in Their Hearts.

Eternity in Their Hearts Summary & Study Guide includes comprehensive information and analysis to help you understand the book. This study guide contains the following sections:

This detailed literature summary also contains Topics for Discussion and a Free Quiz on Eternity in Their Hearts by Don Richardson.

Don Richardson is a Christian missionary and scholar. He examines what he has learned about primitive groups of people, and compares it with what he reads in the Bible, and concludes that God has prepared these groups of people to receive the message of Jesus Christ. He sees this as the fulfillment of God's covenant with Abraham. Richardson says that God has generally revealed himself in the hearts of all people, but specially revealed himself to only a few.

Richardson tells the stories of many groups from around the world, examining their religious practices and beliefs, trying to find some common thread with Christianity. He talks of Epimenides, an ancient prophet from Crete who builds an altar in Athens to an unknown god. Many years later, the apostle Paul uses this as a jumping-off point to explain the message of Jesus. In the 1800s, various groups in Asia believe in one God who has created everything, and they wait for a messenger to bring them the holy book they have lost, so they can be reconciled to God. These people are overjoyed to receive the message of Christianity, although it is quite foreign to their cultures.

Other ethnic groups have a variety of religious practices which a missionary can use to preach the gospel, if only they are willing to study the culture enough to find the key. Some groups have places of refuge, where violence is absolutely forbidden, reflecting the cities of refuge in the Bible. Some groups cast their sins onto an animal or object, calling to mind the ceremonial scapegoat used by the Israelites to take away sins. Some peoples practice a symbolic second birth, where a chief and his wife pretend to give birth to a child of an enemy, as a symbol of peace, and this could be compared to the Christian idea of being born again. Many Native American tribes highly regard the number four, as does ancient Jewish numerology, and Campus Crusade for Christ's Four Spiritual Laws. The Chinese writing system has so many interesting symbols within ideographs, that many of them can be used to illustrate Christian principles. Richardson states that this is because God has prepared these people to receive his message.

Richardson examines the words and actions of Jesus himself, concluding that Jesus very much wants his followers to spread his message all over the world. Richardson thinks that the message is initially given to the Jews, then transferred to Jesus's Twelve Apostles, then given to Paul, and finally broadcast to all Christians who are willing to obey God's command. Richardson encourages Christians to follow the example of missionaries throughout history, believing that all people need and want to hear Jesus's message of redemption and love.

More summaries and resources for teaching or studying Eternity in Their Hearts.

Eternity in Their Hearts from BookRags. (c)2022 BookRags, Inc. All rights reserved.