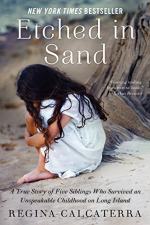 Calcaterra, Regina
This Study Guide consists of approximately 49 pages of chapter summaries, quotes, character analysis, themes, and more - everything you need to sharpen your knowledge of Etched in Sand.

This detailed literature summary also contains Topics for Discussion on Etched in Sand by Calcaterra, Regina.

Regina Calcaterra is the middle child of five, the daughter of a woman she refers to as Cookie because she does not feel is right to call her mother by the mother's first name. Regina and her siblings experienced a brutal childhood filled with hunger, homelessness, and violence. She and her siblings knew from their earliest memories that they had to take care of themselves and each other, and they perfected routines that were designed to protect them from their mother and from the government services that constantly let them down.

Regina's older sisters, Camille and Cherie, took on most of the burden for caring for the younger children until they managed to leave the situation. Cherie left home first, moving in with her boyfriend and having a child while she was still a teenager. When Cookie moved the four remaining children into a slum house with no money and no food, Regina and Camille shoplifted food to survive. They were no strangers to the shoplifting and had it down to a science, paying only for a few items that they could never sneak out of the store. When Regina was thirteen, Camille spent months away from home, leaving it to Regina to deal with their abusive and alcoholic mother while caring for the needs of her younger siblings. Cookie was seldom home but she was brutal and abusive when she did put in an appearance. One night, Cookie attacked the youngest child, Rose. When Regina stepped in to stop her mother, Cookie brutally beat her. The injuries were the end of the line for the family.

After a teacher reported the suspected abuse, Regina arrived home to discover a social worker in their house. The social worker promised Regina she would take care of all the children if Regina told her the truth. Regina and her siblings had spent their lives carefully avoiding these situations and lying their way out of them when they did occur. This time, Regina was exhausted from trying to hold the family together alone, and she gave in. Once she had told the social worker all about their situation, the woman arranged for Regina and Camille to go to one foster home while Rose and Norm were taken to another.

Regina and Camille wound up with Pete and Addie, an older couple who were strict but kind. The social worker began working with Regina and Camille on an emancipation case, ensuring that the girls would never return to Cookie's care. Regina said she would only begin that course if the social worker promised they would work tirelessly to ensure Rose and Norm were never returned to Cookie either. The woman promised. Regina and Camille were quickly granted their emancipation, but Cookie got Rose and Norm back in a very short time. She soon moved the two younger children to Idaho where Rose secretly told her older siblings about horrible abuse.

Regina worked hard, graduated high school, learned gymnastics, and was accepted into college. The state continued to pay a monthly check to her foster parents until she moved out, then Regina got the checks until she finished college. She focused her studies on government, hoping to discover how and why the system had failed to protect her family. She realizes that she wants to continue her education and attends law school. Against all odds and predictions from the social worker, Regina grows up to finish college and embark on a successful career while Camille grows up to begin a loving family of her own.

More summaries and resources for teaching or studying Etched in Sand.