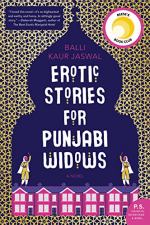 Nikki is a law school dropout, living in London above a pub where she spends her evenings tending bar and wishing for a job with more purpose. Her more traditional sister Mindi enlists Nikki's help posting an ad on a marriage board in Southall, London's borough of Punjabi expatriates. There, Nikki spots an ad for a teaching position for a creative writing class for women, and decides to apply, hoping to empower Punjabi students to share stories about their lives. Nikki's mother warns her to be careful working in Southall, reminding her of Karina Kaur, who was murdered there some 20 years earlier, and whose killer was never caught.

When the creative writing courses begin, Nikki realizes that they are not exactly what Kulwinder, the Community Director of the Sikh Association, had advertised; the students are largely illiterate widows who have signed up to bring some variety to their days. Only Sheena, the youngest widow of the bunch, can read and write. One day, Sheena finds an English book of erotica, and Nikki walks in on her reading the stories to the widows. Nikki quickly realizes that the widows have a wealth of knowledge on the subjects of desire and sexuality, and are eager to share their own fantasies. The writing class becomes a erotic storytelling workshop.

Tarampal, one of Nikki's students, disapproves of the erotica project, and complains to Kulwinder, who mistrusts Tarampal and dismisses her complaints. A few months earlier, Kulwinder's daughter Maya died while living under Tarampal's roof, destroying the women's close friendship forever. Kulwinder has been living in fear and despair ever since the death of her daughter. She and her husband Sarab spend their evenings in silence, with the curtains drawn, blocking their view of Tarampal's house across the street. Though Maya's death was ruled a suicide—she was said to have killed herself after her husband Jaggi discovered she was having an affair—Kulwinder is full of doubts. In the weeks after Maya's death, Kulwinder followed up with police and lawyers, seeking answers, but received threatening phone calls warning her to leave Maya's case alone.

A group of men called the Brothers keep the women of the community in check, patrolling the temple grounds and bounty hunting young runaways, seeing themselves as Southall’s morality police. Nikki realizes that she and the widows could be at great risk if the Brothers find out about their classes, given what happens in Southall to women who rock the boat, but rumors of the erotic stories spread unbidden through London, and the class continues to grow. Nikki soon learns the truth about Karina Kaur’s death from Sheena, and becomes suspicious of the story Tarampal has told her about Maya’s suicide.

When Kulwinder finally realizes what has become of the classes, she shuts them down, confiscates the stories, and fires Nikki, who believes she has found evidence that Jaggi forged Maya’s suicide note. In a dramatic climax, Tarampal tricks her way into Nikki’s apartment, letting Jaggi in behind her, determined to destroy Tarampal’s class registration form which has his incriminating handwriting on it. Jaggi confesses that he and Tarampal were having an affair, and that, unbeknownst to Tarampal, he killed Maya when she found out to protect Tarampal’s reputation. He attacks Nikki, knocking her unconscious, and sets fire to her apartment.

Meanwhile, Kulwinder has read the stories and they have brought new life to her marriage with Sarab. When Nikki’s home address is stolen from Kulwinder’s office, she realizes that she is in danger and that Nikki’s theory about Jaggi was right. She and the widows arrive at Nikki’s apartment just in time to pull her to safety.