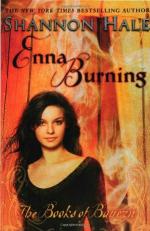 Shannon Hale
This Study Guide consists of approximately 52 pages of chapter summaries, quotes, character analysis, themes, and more - everything you need to sharpen your knowledge of Enna Burning.

Bayern is the main setting of "Enna Burning." It is Enna's home country. Geric and Isi are king and queen of this country. Most of the novel's actions occur in Bayern.

Tira is the nation to the southeast which decides to invade Bayern. Much of the novel is spent at war with Tira.

Sprucegrove is the location where Geric calls a meeting of the Forest javelin-bearers to assure them of their importance to the kingdom. Unfortunately, Tira invades Bayern so this meeting turns into a request for volunteers to join the army.

Enna is from the Forest which is on the outskirts of Bayern, but Forest dwellers have recently gained citizenship in Bayern due to Isi's influence.

Ostekin is where the first battle occurs between Bayern and Tira. This is where Leifer dies and where Enna obtains the gift of fire-speaking.

More summaries and resources for teaching or studying Enna Burning.