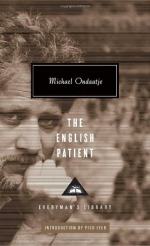 Michael Ondaatje
This Study Guide consists of approximately 70 pages of chapter summaries, quotes, character analysis, themes, and more - everything you need to sharpen your knowledge of The English Patient.

Poet and novelist Michael Ondaatje is perhaps best-known for his novel The English Patient, which focuses on an international group of characters isolated together in an abandoned Italian villa at the end of World War II. The novel explores themes of nationhood, identity, and displacement; the exploration of such themes seems to have arisen from Ondaatje's own life experiences. He was born in Colombo, Sri Lanka, on September 12, 1943, to parents Philip Mervyn Ondaatje and Doris Gratiaen. Ondaatje's family was what is known as Burghera minority but affluent class of people descended from the South Asian island's non-British European colonists. He spent his early childhood in Sri Lanka; after his parents divorced, he moved with his mother and siblings to England. He subsequently moved to Canada, where he attended the University of Toronto, graduating with a bachelor's...

More summaries and resources for teaching or studying The English Patient.