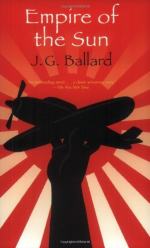 Empire of the Sun Summary & Study Guide includes comprehensive information and analysis to help you understand the book. This study guide contains the following sections:

This detailed literature summary also contains Topics for Discussion on Empire of the Sun by J. G. Ballard.

It begins on the eve of the Pearl Harbor attacks in 1941. Jim is the only child of a wealthy British couple living in Shanghai for business reasons. Shanghai is already occupied by Japanese forces, concerning many people, including Jim’s parents, about escalating violence. Jim, however, is not afraid of the war, but interested in it. He admires the Japanese soldiers’ bravery and has a strong fascination with fighter planes. Soon after the Pearl Harbor attack, the Japanese open fire in Shanghai.

In the confusion and chaos after this attack, Jim gets separated from his parents and spends several days in Shanghai looking for them and a place to stay. All of the homes in his neighborhood have been seized by the Japanese government, but he manages to stay in them until Japanese families move in. When he has to leave his neighborhood, Jim sleeps near the Bund, the area around Shanghai’s waterfront.

Jim soon is discovered by the Japanese and sent to a detention camp. There he is reunited with Basie, an American he had met at the waterfront. He and Basie form a working relationship where Basie teaches Jim survival skills and Jim runs errands for Basie. Most of Jim’s closest relationships are of this type, instead of being traditional friendships.

Both Basie and Jim are selected to leave the detention center and go to a camp. This pleases Jim because it increases his chances of finding his parents. On the way to the camp, Jim meets Dr. Ransome, another prisoner, who eventually becomes Jim’s closest acquaintance. It takes several days for the prisoners to get to a camp already built for them or that will accept them, given their sickly conditions. Until they find a camp that will accommodate them, they are confined to the truck. They finally arrive at Lunghua camp, which becomes their home for the next three years.

During the three years Jim is at Lunghua camp, he enjoys some of the happiest years of his life. The prisoners worked together to form a community within the camp and they have entertainment, lectures, and a school. All of this plus the chores Jim does for Basie and Dr. Ransome give him purpose, stability, and provide a makeshift extended family. While Jim still wants to be reunited with his parents, he doesn’t necessarily want to leave Lunghua.

As the years progress and Japan is on the verge of surrendering, conditions worsen at the camp. Food is running out and Jim has to do what he can to survive. His health is ailing and Dr. Ransome doesn’t have the necessary supplies to help him or the other prisoners. Mr. Maxted, the once debonair, cultured man from Jim’s youth, is now an emaciated shell of a human being.

The Japanese soldiers, who once tolerated Jim’s curiosity about them, now are nervous, anxious, and more violent. The sense of community the prisoners had formed is crumbling as most people look out only for themselves now. Jim tries hard to maintain the sense of home Lunghua once had, even if he knows it’s gone.

As the American air attacks become almost continuous on Lunghua, the Japanese soldiers evacuate the camp, telling the prisoners they are going where the rations have been re-located. They are allowed to take one suitcase each. Jim soon learns the soldiers’ true intentions are to lead the prisoners away from the sight of the Americans so they can execute them. Some prisoners collapse and die on the march and are left there by the soldiers. Before Jim figures out the soldiers’ true intentions, he vacillates between staying with the rest of the prisoners or falling behind with the dying. Mr. Maxted, who can barely manage the walk himself, convinces Jim to keep walking until they reach Nantao stadium, where he then forces Jim to play dead so the soldiers leave both of them behind.

Mr. Maxted soon dies and Jim has to decide what to do next, now that he is completely on his own. He decides to head back to Lunghua. Along the way, he sees American planes dropping canisters to the ground. Jim finds one and discovers it is full of Spam, chocolate, powdered milk, and American magazines. For the first time in three years, he eats something other than sweet potatoes. Newly revived, he continues to Lunghua and finds it now occupied by a few of its former British prisoners who have hoarded many of the dropped canisters. They don’t want to let Jim in, but let him stay after he tells them lies about the riches he found at Nantao stadium. Just as Jim is convinced he can now stay at Lunghua, the prisoners decide to leave the camp, packing their supplies in a truck. They take Jim with them back to Nantao stadium and make him wait in the truck while they attempt to find the goods Jim said were there. Jim takes that opportunity to escape but doesn’t go far when he barely avoids attack by another roving gang of scavengers. As it turns out, one of the people in this gang is Basie, who stops the gang from killing Jim. They take Jim with them as they loot different places, threatening his life by using him as a decoy. They return to Nantao stadium to loot it based, again, on Jim’s lies about its contents. Jim once again is told to wait in the car and, once again, escapes. He makes it to Lunghua camp where he runs into Dr. Ransome who tells him the war is over and takes him home to his parents. Two months later after Jim’s health has been restored, he and his parents take a ship to England, never to return to Shanghai again.

Empire of the Sun from BookRags. (c)2022 BookRags, Inc. All rights reserved.