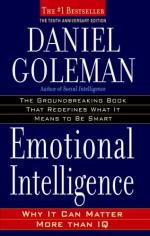 Emotional Intelligence: Why It Can Matter More Than IQ Summary & Study Guide

Daniel Goleman
This Study Guide consists of approximately 28 pages of chapter summaries, quotes, character analysis, themes, and more - everything you need to sharpen your knowledge of Emotional Intelligence.

Emotional Intelligence: Why It Can Matter More Than IQ Summary & Study Guide Description

Emotional Intelligence: Why It Can Matter More Than IQ Summary & Study Guide includes comprehensive information and analysis to help you understand the book. This study guide contains the following sections:

This detailed literature summary also contains Topics for Discussion and a Free Quiz on Emotional Intelligence: Why It Can Matter More Than IQ by Daniel Goleman.

Daniel Goleman combines his journalism skills with his Ph.D. in brain and behavioral sciences to explain the complex subject of Emotional Intelligence (EI). Citing the scientific studies done on various aspects of emotion and behavior, Goleman builds a strong case for the necessity of learning how to interpret and handle emotions from infancy to adulthood. He presents the physical, chemical and social elements that shape emotional responses.

In Part One, Goleman presents the function and process of emotion as it stimulates the body to action and sometimes to over-reaction that he labels 'emotional hijacking'. The brain attempts to balance emotion and reason to decide on actions. However, in emergencies or situations that arouse intense passions, reason can be short-circuited. The evolutionary development of the brain parallels the human brain, as it grows in the fetus from the primitive brain to the higher functioning parts of the brain. Recent research has uncovered how the architecture of the neural pathways affects the interplay of emotions and reason.

In Part Two, the nature of emotional intelligence is compared to IQ as a predictor of success in life. Intense passions, such as anger, anxiety, fear and melancholy feed upon themselves in a cycle that can be broken with training. Hope, optimism and mastery of one's emotions contribute to overall improved health and excellence that can be recreated at will. This state of emotional mastery has many names, such as 'flow' and 'being in the zone'. Goleman explains the development and importance of empathy as one of the key social arts.

In Part Three, emotional intelligence skills are examined in the relationship of marriage and in the business environment. Mastery over emotions determines the success of important relationships as much as it affects personal health. Toxic emotions, such as anger and worry, shorten lives and destroy the quality of life. Temperament is also examined as a predisposition of behavior.

In Part Four, Goleman presents childhood as the window of opportunity for shaping the emotional intelligence and the future of the next generation. Children who suffer long-term abuse can develop post-traumatic stress disorder if left untreated. Experiences of long-term abuse actually change the brain, making a child more susceptible to future abuse.

In Part Five, studies reveal the costs of emotional disabilities in dealing with the stresses of life. Depression, violence, drug and alcohol abuse, aggression and other negative results arise from a lack of emotional stability. State-of-the-Art educational programs, known collectively as Social and Emotional Learning (SEL), are being tested to integrate the teaching of emotional intelligence skills alongside regular academic subjects. Early analysis shows reduced discipline problems and improved overall academic performance. Goleman and other experts advocate teaching these skills in childhood, when the brain is still developing. The introduction and practice of critical skills can be timed to match the stage in life when the child is most receptive to learning that skill.

More summaries and resources for teaching or studying Emotional Intelligence: Why It Can Matter More Than IQ.

Emotional Intelligence: Why It Can Matter More Than IQ from BookRags. (c)2022 BookRags, Inc. All rights reserved.