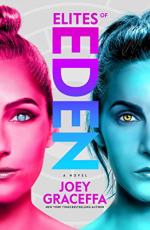 Graceffa, Joey
This Study Guide consists of approximately 56 pages of chapter summaries, quotes, character analysis, themes, and more - everything you need to sharpen your knowledge of Elites of Eden.

This detailed literature summary also contains Quotes and a Free Quiz on Elites of Eden by Graceffa, Joey.

The following version of this book was used to create this study guide: Graceffa, Joey. Elites of Eden. New York: Simon and Schuster, 2017.

Yarrow is a teenage girl living in Eden, a self-contained society that is protected from the harsh conditions outside Eden's protective bubble. She is a self-centered, entitled girl who cares little about the feelings of others until she meets Lark, a new girl at the elite boarding school. Lark leads Yarrow on a journey that helps her discover she is actually Rowan, a girl who has lived her entire life in hiding as an illegal second-child and who is willing to fight for her friends. Rowan is furious when she learns she has been brainwashed into believing a cruel government official she believes to be her mother has actually been experimenting on her. Chief Ellena has fallen under the spell of power, and is seeking to make all the citizens of Eden into complacent, thoughtless people who never question the government's power. Rowan also learns that her biological father helped Ellena.

The government officials routinely implant lenses onto the eyes of every legitimate citizen of Eden and these implants are used by EcoPanopticon to control memories. Known as the EcoPan, this is an artificial intelligence that controls Eden. EcoPan is seeking a way to keep humans from again bringing the Earth to the brink of destruction and has kept the population from realizing that control for 1,000 years.

Once Rowan has one of her lenses removed, she recalls memories Ellena had wiped from her brain. Rowan knows she found a forest with living creatures past the desert that surrounds Eden but others have trouble believing her. A group of them make a trip into the desert in search of the forest, but they do not find it, making Rowan doubt her own memories. During that trip, Lark is sucked underground by nanosand, which is designed to keep anyone from crossing the desert. Rowan believes that Lark is dead, but encounters her later in a government facility. Ash has a life-threatening asthma attack, forcing Rowan to turn back before she is ready.

Rowan is staying in an underground cavern inhabited by a large society of second children who would be persecuted and arrested by the government if they tried to live above ground. A girl from the Oaks boarding school follows her and a tracking device she carries leads Eden's Greenshirt police force to the cavern. They attack, taking most of the Underground residents into custody. Rowan's biological father helps her escape before Ellena can begin experimenting on Rowan again, and she sets off a bomb in the Underground in the hope of helping the other captured children escape.

Rowan believes the government officials are deceiving the population until EcoPan reveals itself to her by protecting her from the explosion. EcoPan believes she is performing her mandated duty, and she imperiously takes control of Rowan's future by expelling her from Eden as she has done a select few other residents over the years. Rowan discovers that her biological mother is not dead, as she had believed, and she pledges to find a way to destroy Eden.

More summaries and resources for teaching or studying Elites of Eden.