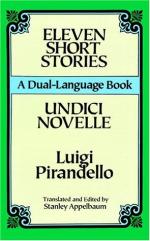 This is the attractive daughter of Papa Camillo. Malia is in love with the farm worker Jeli, but is forbidden by her father to marry him. She elopes with Jeli.

This is a worker for Papa Camillo. Jeli is a young man who always smokes a pipe. He is bold with Camillo and wishes to marry his daughter, Malia. When Camillo refuses to agree to the marriage, Jeli makes arrangements to run away with her.

Papa Camillo is a stout, belligerent farmer, the father of Malia, and the employer of Jeli. He lives with his daughter in a small hut on a hillside. Camillo is furious when his daughter runs away with Jeli and sets fire to the hut in his rage.

Micuccioappears in Citrons From Sicily

This is a flute player in a small orchestra in Messina, a town in Sicily. Micuccio falls in love with Teresina, a woman from Messina, and devotes himself to her development as a singer. He becomes engaged to Teresina, but they put off their marriage to allow her to go to Naples to study voice.

This character is also called Teresina. She is a popular singer who started off a poor Sicilian girl. She was encouraged by Micuccio to pursue a career in singing and left him with the promise to marry him after five years. She is self-centered and selfish, however, and abandons all thought of marrying Micuccio after she finds success and popularity.

Aunt Martaappears in Citrons From Sicily

This is Teresina's mother who is also called Aunt Marta by Micuccio. She has accompanied her young daughter in her rise as a singer, but is embarrassed and ashamed by the luxurious and loose lifestyle her daughter has adopted.

Annaappears in With Other Eyes

This is the main character in With Other Eyes. She is a young woman married to Vittore Brivio, to whom she is devoted. Over the course of the story, she comes to understand she is not loved in return.

Vittore Brivioappears in With Other Eyes

This is the somewhat sinister husband of Anna. Vittore treats Anna condescendingly and is frequently away from home on trips that are not explained and which she does not inquire about. He somehow forced his first wife to kill herself after he discovered she betrayed him.

Almiraappears in With Other Eyes

This is the first wife of Vittore and the woman in the portrait discovered by Anna. Almira had an affair while married to Vittore and subsequently killed herself.

This is an eccentric eye doctor and the leader of an eye clinic. Dr. Falci has an unkempt appearance and a frank manner of speaking that makes him highly unpopular. He is called as the last resort by the Marchesa in an attempt to cure her blind son.

Lydia Venturiappears in A Voice

This is the housekeeper of the Marchesa Borghi who stays on to care for the Marchesa's blind son after her death. Lydia falls in love with the Marchese Borghi and they become engaged. She leaves him after his sight has been retored, but before he has seen her.

Marchesa Borghiappears in A Voice

This is the mother of the Marchese Borghi and the employer of Lydia Venturi. The Marchesa spares no expense in trying to find a doctor who might cure her blind son, but dies suddenly after the visit by Dr. Falci, never knowing that he was able to cure him.

Marchese Silvio Borghiappears in A Voice

This is a handsome young nobleman who lost his sight a few years before the death of his mother. The Marchese falls in love with his housekeeper, Lydia, but she leaves him before he can see her following his successful eye surgery.

This is a doctor who has hit on hard times after his wife becomes ill. He lives in a rundown house where he cares for his wife and seven children.

Neli and Saro Tortoriciappears in The Fly

These characters are two young brothers who try to help their cousin, Giurlannu, when they discover him sick and dying. Neli is engaged and is to be married on the same day as his cousin.

This is a young man who dies of anthrax. He is proud and refuses to do what he thinks is women's work.

This is the blustery olive farmer in The Oil Jar. Zirafa has a short temper and is fond of suing anyone he has business dealings with. He meets his match in Dima.

Dima Licasiappears in The Oil Jar

This is a person who has invented a powerful cement that he claims can fix anything. He becomes trapped in Zirafa's oil jar while repairing it, creating the absurd situation central to the story.

Celestino Perazzettiappears in It's Not to Be Taken Seriously!

This is the odd character at the center of the story who many think is crazy because of his habit of bursting into uncontrolled laughter. He is a well-to-do man and much liked. He is quick to fall in love and has been engaged over 20 times.

Elly Lamannaappears in It's Not to Be Taken Seriously!

This is an attractive young woman who becomes engaged to Perazzetti. He confides in her the reason for his apparently odd behavior, and she is accepting of him. Perazzetti calls off their engagement when he cannot stop imagining how much Elly looks like her brother, Lino

Lino Lamannaappears in It's Not to Be Taken Seriously!

This is a onetime friend of Perazzetti and the brother of Elly Lamanna. Lino must end their friendship and challenge Perazzetti to a duel when he breaks off his engagement.

Professor Agostino Totiappears in Think It Over, Giacomino!

This is an elderly teacher who has taken a young wife. Professor Toti is "philosophical" about his marriage, believing it is something he is doing out of kindness for his wife, even to the point of encouraging her to have an affair with a man closer to her own age so she will have someone to look after her when he dies.

Maddalenaappears in Think It Over, Giacomino!

This is the young wife of Professor Toti, who is in love with Giacomino. Although a poor woman when she marries the Professor, she receives a large inheritance from a brother after she marries. She is miserable when Giacomino becomes engaged to another woman.

Giacomino Puglieseappears in Think It Over, Giacomino!

This is the young man Professor Toti chooses to help by getting him a job at a bank and encouraging him to have an affair with his wife so that the two might be married after the death of the Professor. Giacomino resents Toti's kindness and threatens to ruin his plans by marrying someone else.

Niniappears in Think It Over, Giacomino!

This is the young son of Maddalena. He is actually the son of Giacomino, which Toti knows, but who he is bringing up as his own.

The Writerappears in A Character's Tragedy

This is the narrator of "A Character's Tragedy" and a stand in for Pirandello himself. He is a man with a vivid imagination who holds imaginary conversations with the characters in his stories.

Dr. Filenoappears in A Character's Tragedy

This is a fugitive character from another novel that intrudes upon the imagination of the writer in "A Character's Tragedy." Dr. Fileno has developed a philosophy of life that copes with hardships by distancing himself from events. He appeals to the writer to give him a story to appear in, but is dismissed by the writer.

Blackieappears in A Prancing Horse

This is the black horse formerly belonging to a noble family who finds himself sold to a undertaker to pull funeral carriages. He becomes disturbed when called on to pull the hearse of his beloved former owner.

Fofoappears in A Prancing Horse

This is the talkative stablemate of Blackie and the character that provides the main point of view in "A Prancing Horse." Fofo eventually realizes the true nature of his easy work over the course of the story.

The Princessappears in A Prancing Horse

This is the former owner of Blackie who becomes ill and is confined to a chair. She eventually dies from her illness, and Blackie, her former horse, is coincidentally called on to pull her hearse.

Mrs. Frolaappears in Mrs. Frola and Mr. Ponza, Her Son-In-Law

This is the elderly mother-in-law of Mr. Ponza. Mrs. Frola believes that Mr. Ponza is married to her daughter but that he believes he is married to an entirely different woman. She may be deluded, but the reader is not told whether this is the case. She is devoted to her son-in-law, despite the fact that he will not let her see her daughter.

Mr. Ponzaappears in Mrs. Frola and Mr. Ponza, Her Son-In-Law

The son-in-law of Mrs. Frola. Mr. Ponza claims his first wife, the daughter of Mrs. Frola, died and that he has remarried, but that Mrs. Frola refuses to believe that her daughter is actually dead. He says his second wife and he pretend she is Mrs. Frola's daughter to humor her in her delusion. He himself may be deluded, however, and the question is left open.