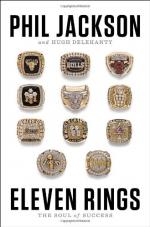 Summary
+Chapters Summary and Analysis
The Circle of Love and The Jackson Eleven
Red and The Quest
Dances with Bulls and Warrior Spirit
Hearing the Unheard and A Question of Character
Bittersweet Victory and World in Flux
Basketball Poetry and As the Worm Turns
The Last Dance and One Breath, One Mind
The Eightfold Offense and The Joy of Doing Nothing
One-Two-Three—Lakers! and The Wisdom of Anger
Chop Wood, Carry Water and Destiny’s Children
Deliverance and This Game’s in the Refrigerator
Important People
Objects/Places
Themes
Styles
Quotes
Topics for Discussion
Order our Eleven Rings: The Soul of Success Study Guide

Phil Jackson
This Study Guide consists of approximately 43 pages of chapter summaries, quotes, character analysis, themes, and more - everything you need to sharpen your knowledge of Eleven Rings: The Soul of Success.

In his book, Jackson talks about the ring on a variety of levels. First, the ring is a trophy given to the winners of an NBA championship. In this sense, Jackson says the ring is a symbol of power and status. On a psychological level, Jackson says the ring symbolizes a quest to find harmony, connection and wholeness. He refers to Native American culture in which the symbolism of the ring was so important that homes, villages and whole nations were built in a series of interconnected hoops or rings. In order to encourage players during games, Jackson said he would show his ring to remind them of the connection, or bond of love, between all of the players.

The triangle offense is a system taught to Jackson by Tex Winters when Jackson was studying as a graduate student. Jackson says he likes the...

More summaries and resources for teaching or studying Eleven Rings: The Soul of Success.