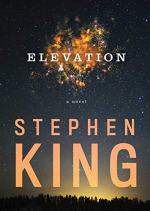 Stephen King
This Study Guide consists of approximately 39 pages of chapter summaries, quotes, character analysis, themes, and more - everything you need to sharpen your knowledge of Elevation.

This detailed literature summary also contains Quotes and a Free Quiz on Elevation: A Novel by Stephen King.

The following version of the novel was used to create this study guide: King, Stephen. Elevation. Scribner, October 30, 2018.

In the novella Elevation by Stephen King, Scott Carey does not look any different, he is the typical overweight American male, but the scale showed that he was losing weight at an alarming rate. Scott talked to Bob Ellis, his friend, and a retired doctor, about what might be happening to him. Not wanting to spend what might be left of his life being tested and viewed as an oddity, Scott decided to make at least one thing in his life right. Scott’s determination to befriend a lesbian couple in his neighborhood, one he had offended without even realizing it, sparked a change in his entire community.

Scott paid a visit to Bob when he first became scared by his weight loss. He had a complete examination by his regular doctor and was told he was in perfect health. Scott demonstrated to Bob that he weighed the same amount fully clothed as he did wearing only underwear. He had been regularly losing weight, according to the scale, but never got any thinner. Scott admitted he had been scared when he realized that the clothes that he wore appeared to weigh nothing. Bob did not have any answers for Scott. He suggested that Scott tell his doctor what was happening, but Scott said that he did not want to be forced to undergo medical testing.

At home, Scott was pleased when he was able to get a picture of his neighbors’ dogs doing their business on his lawn. He had approached Missy Donaldson and Deirdre McComb, married lesbians, about their dogs in the past but Deirdre had told him that the dog was incorrect. When Scott approached Deirdre with the picture she became even angrier. She said he had proved his point and won the war. Scott tried to apologize but Deirdre would not allow him to do so. Missy came to Scott’s house later to apologize for Deirdre. She told him that she and Deirdre were probably going to lose the restaurant they had opened because the community refused to support them. Missy explained that Scott had offended them because the only time he had really talked to them was to complain about their dogs.

Hoping to get a fresh start with the two, Scott and Bob ate at the couples’ restaurant. Instead of smoothing things over, Scott’s attempt to make peace only made Deirdre angrier. Scott next decided to run in Castle Rock’s annual Turkey Trot, a fundraiser for the recreational center. Deirdre had won this race previously and was planning to run again. Scott made her a wager that if she won the race, he would leave her alone. If Scott won the race, he would prepare dinner for Missy and Deirdre and they would have to try to be civil to one another from that point forward.

Because Scott weighed so little, he actually came close to winning the race. Deirdre turned to see Scott behind her and tripped. He stopped to help her up. She felt the effect of his condition and looked at him in shock but he told her to run. In that evening’s online edition of the paper, there were pictures of Scott helping Deirdre up and also of him appearing to hug both Deirdre and Missy at the finish line. The attitude of the townspeople changed after this show of acceptance by Scott. Missy and Deirdre’s restaurant was so busy they had to hire help and extend their hours.

Missy and Deirdre also became friends with Scott. Even though Deirdre won the race, Scott still cooked a meal for them. In the presence of Bob, and his wife, Myrna, Scott told Missy and Deirdre about his strange condition. Although Scott sensed he did not have much time left, Scott and his new group of friends met together to eat on a weekly basis.

On the last week Scott felt comfortable having people in the house, he asked Deirdre if she would help him when the time came for him to go. Deirdre agreed. Scott called for her one day when the scales registered his weight at 2.1 pounds. He had to restrain himself in a wheelchair and harness so Deirdre could get him outside. With Deirdre’s help, Scott released himself into the night sky. He was holding a SkyLight, an expensive firework that he set off high above the town as he floated toward the stars.

More summaries and resources for teaching or studying Elevation: A Novel.