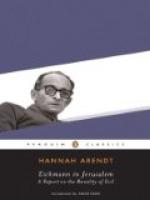 This detailed literature summary also contains Topics for Discussion on Eichmann in Jerusalem by Hannah Arendt.

“Eichmann in Jerusalem” by Hanna Arendt is the story of the trial of Adolph Eichmann a mid-ranking SS officer who had been an expert in forced emigration and then later in the more deadly forced evacuation. Evacuation became synonymous with death as the years of the war advanced and the Nazis were determined to fulfill Hitler’s orders for the Final Solution of the Jewish problem.

Unlike the high-ranking Nazis who had been tried right after the war in Nuremberg, Germany, Eichmann’s trial didn’t take place until 1961 after he was hunted down and caught living under a false identity in Argentina by Israel special agents. What was also different about Eichmann’s trial is that he was tried alone and the proceeding took place in Israel. The driving force behind having the trial in Israel was Israeli Premier David Ben-Gurion. He and most Jews felt it was appropriate to try the man who sent millions of Jews to their deaths to be tried by the Jews.

The trial lasted from April 1961 until August 1961 after which the three-judge panel, led by Presiding Judge Moshe Landau, took four months to reach their decision. It was a foregone conclusion by most that Eichmann was guilty and would be hung. But the judges wanted to give the defendant a fair trial so that any criticism would be kept to a minimum. Ben-Gurion wanted a show trial for the world to see. He wanted everyone to know including young Jews, non-Jews, Jews were not impacted by the Holocaust and basically everyone the atrocities that Jews had suffered during the war.

While he wanted a show trial, Judge Landau wanted a normal proceeding and the Attorney General, Gideon Hausner, had to walk a fine line to satisfy both men. There were probably too many prosecution witnesses who just told stories of the suffering that were not directly connected to Eichmann. But, as Hausner put it, he wanted to paint the picture of the times and what was going on in the backdrop of Eichmann’s operations.

In addition to the trial, there is much detail about how the Jews from the European countries were made to wear yellow stars that readily identified them as Jews. The countries, some of which were invaded and taken over by Nazis and others that cooperated with the Nazis were gathered, lied to, evacuated and placed in death camps. They were made to sign over all their property to the Nazis and if they didn’t sign, they might be shot on the spot. The question on everyone’s lips before Eichmann’s trial, during it and to the current day was why the Jews didn’t rebel and why inexplicably they sometimes cooperated in their own demise.

There were volumes of evidence and scores of witnesses who proved Eichmann’s guilt. Eichmann’s main defense was that he was obeying his orders and German law. It was the law of the Third Reich that any order Hitler announced verbally was tantamount to written law. Eichmann claimed he had no choice but to obey. While there are questions raised about the lack of fight on the part of Jews to defend themselves, there is also the question how so many seemingly normal men could come to think that crime, especially murder, was acceptable in any way – no matter who gave the orders.