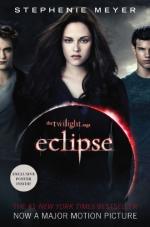 Stephenie Meyer
This Study Guide consists of approximately 30 pages of chapter summaries, quotes, character analysis, themes, and more - everything you need to sharpen your knowledge of Eclipse.

This detailed literature summary also contains Topics for Discussion and a Free Quiz on Eclipse by Stephenie Meyer.

Eclipse is the third novel in the Twilight series by Stephanie Meyer. In this novel, after reuniting at the end of the prior novel, Edward and Bella look forward to their high school graduation and Bella to the day when she will become immortal like Edward. However, Bella's old nemesis, Victoria, is back with a new plan to kill Bella in revenge for her lover, James' death. Edward, Bella, and the rest of the Cullen family are forced to turn to their newest enemies, the Quileute werewolves. Eclipse is a novel of suspense and romance that will leave teen readers anxious to learn what will happen to Bella and Edward next.

Bella has not been talking to her friend, Jacob, since he turned her in to her father for riding the motorcycle he helped her restore. However, Bella's father would prefer to see his daughter with Jacob rather than her boyfriend, Edward, so he agrees to unground Bella as long as she promises to spend some of her free time with Jacob. Bella reluctantly agrees.

As Bella and her friends make their way through their senior year of high school, Bella looks forward to the moment when she will become a vampire like her boyfriend Edward. Bella worries that if she waits too long, she will forever be much older than Edward who is forever frozen at seventeen. However, Edward is convinced that Bella is not ready. Therefore, Edward refuses to allow Bella to be transformed until she has agreed to be his wife.

As par her promise to her father, Bella begins communicating with Jacob again. Jacob tells Bella things about the werewolf pack he belongs to that she would normally not be allowed to know, including the fact that several members of the pack have imprinted, meaning they have met mates whom for some unknown reason are biologically destined to be with.

Although life in Forks is pretty dull for Bella, she and her chosen family, the Cullens, are following a series of brutal murders in Seattle. It becomes clear to the Cullens that the murders are being committed by newborns, vampires recently created. The Cullens wait with the hope that the Volturi, the vampire ruling entity, will intervene, but it soon becomes obvious that they do not intend to do so before many of humans are killed. The Cullens decide to step in. However, the Cullens struggle to find another group of vampires to help them. In the end, Jacob volunteers his group of werewolves to help when he realizes these newborns somehow pose a danger for Bella.

As Bella, Jacob, and Edward await the arrival of the army of newborns, they find an opportunity to discuss Jacob's affections for Bella. Bella comes to realize how much damage Jacob's love for her has caused him and feels guilty. After Bella and Edward are confronted by Victoria and Edward ends the feud by killing Victoria, Bella finds that she must confront Jacob on his feelings for her. Bella tells Jacob that she loves him and can imagine their life together, but that she feels she cannot live without Edward. Bella chooses Edward over Jacob, causing Jacob deep emotional devastation. At the same time, Bella finally agrees to marry Edward before changing into a vampire.