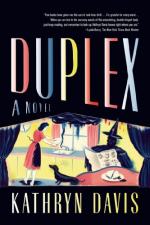 Kathryn Davis
This Study Guide consists of approximately 33 pages of chapter summaries, quotes, character analysis, themes, and more - everything you need to sharpen your knowledge of Duplex.

This detailed literature summary also contains Quotes and a Free Quiz on Duplex by Kathryn Davis.

The following version of this book was used to create this study guide: Davis, Kathryn. Duplex. Minneapolis: Graywolf Press, 2013. Hardcover.

The novel opens in an unnamed suburban town. On one street in the town, a local teacher named Marjorie Vicks resides. She is 50 years old, unmarried, and has a pet dog. She is dating a local man named Walter Woodard, who is often referred to by the nickname ‘the sorcerer.’ Two local kids, Mary and Eddie, also reside on the street, as does a family of robots. Eddie and Mary are students of Marjorie’s. Mary and Eddie begin dating each other as teenagers.

However, after graduating from school, Mary leaves Eddie and begins dating Walter. Mary attends art school for a short time, but she soon drops out. Mary and Walter marry each other and move in together. Mary soon becomes pregnant and gives birth to a daughter, whom she names Blue-Eyes.

Meanwhile, Eddie becomes a professional baseball player. He suffers an injury early in his career and is placed on the disabled list, meaning he is not allowed to play until he recovers. He eventually does recover and proves to be a star player. Unfortunately, he is unhappy in his life. He does not visit his family often, and he remains heartbroken over losing his relationship with Mary.

Mary and Eddie’s former classmate, Janice, eventually marries a kind man named Henry. Unfortunately, Janice is bored and unfulfilled by her adult life, and she longs for childhood. She entertains herself. By making up stories and by recounting local, supposedly true legends. She is especially interested by a supposedly true event known as the Rain of Beads, in which a group of robots tried to copulate with a group of human female teenagers. The process caused the human girls to die painful deaths.

Another of Eddie and Mary’s former classmates is Cindy XA. She is a robot, but she eventually begins dating a human man named Roy Duffy. Cindy and Roy do not marry each other, but they eventually move in together, and Cindy even takes Roy’s surname. Cindy remains friends with Mary, and she sometimes declares enigmatic prophesies to Mary; the prophesies always pertain to death and/or the end of the world.

Marjorie eventually retires, and she wanders in an unfamiliar area distant from the town. She eventually realizes that she is deceased and is wandering through some type of afterlife. Meanwhile, Mary continues to enjoy being a mother, but she is dismayed when her daughter, Blue-Eyes, grows emotionally distant form her as the years go by. Blue-Eyes enrolls in a boarding school and eventually forms a romantic/sexual relationship with a classmate named Penny. After graduating from school, Mary and Penny move to a city to live together.

Mary’s storyline ends when she uses a strange bean-like object to either kill herself or enter another dimension; the event is portrayed in an ambiguous fashion, and it may simply represent her decision to leave her unhappy marriage and begin a new life on her own. Years later, Eddie is an old man residing in an assisted living home. He has begun to lose his memory and his perception of time. His only apparent visitor is Cindy. Meanwhile, Janice approaches old age and still years for childhood. She and her friends attend the funeral of a recently deceased one of their friends. They tell stories of the friend’s life in order to commemorate her.

More summaries and resources for teaching or studying Duplex.