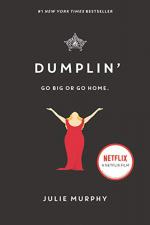 Julie Murphy
This Study Guide consists of approximately 42 pages of chapter summaries, quotes, character analysis, themes, and more - everything you need to sharpen your knowledge of Dumplin'.

This detailed literature summary also contains Quotes and a Free Quiz on Dumplin' by Julie Murphy.

The following version of this book was used to create the guide: Murphy, Julie. Dumplin'. Balzer + Bray, 2015.

Dumplin’ opens up on Willowdean Dickson at the end of her sophomore year of high school. Her best friend is beautiful, slim Ellen Dryver and she works at Harpy’s diner with Private School Bo. When the summer arrives, Willowdean and Ellen go to work, the pool, or just lounge around listening to Dolly Parton records together. Willowdean notices a crack forming in her relationship with Ellen around the time that she loses her virginity to her boyfriend, Tim, and Willowdean is unable to give her advice from personal experience. To make matters worse, Ellen has a new friend from work, Callie, who is able to converse with Ellen about this new stage in her life. Callie and Willowdean actively dislike each other, but Ellen continues hanging out with both of them.

As Ellen grows closer to Callie, Willowdean’s attention shifts to handsome Bo, and to Willowdean’s surprise, he makes a move and the two begin a summer fling. When Willowdean realizes that Bo has been hiding the fact that they are going to attend the same school in the fall and that the more time she spends with him, the more self-conscious she feels about her plus-size body, she cuts off the relationship. Things remain silent for a few months as Willowdean embarks on a journey of self-discovery and self-fulfillment. Along the way, she starts going out with a football player, Mitch, who is more suitable for her according to their physical sizes, but who does not give her the butterflies that Bo does. She must choose between a fulfilling relationship with Bo that is sure to induce ridicule or one with Mitch that would be more acceptable by other people’s standards.

Pageant season gets going, which means that Willowdean’s mom, Rosie, is on high alert for all things pageant related. She is also frequently exhausted as she has a full-time job at a nursing home. The two constantly butt heads with one another over health and weight, but Willowdean is mostly accustomed to this. However, they are still learning to cope after the loss of Rosie’s sister, Lucy, who lived in the same house with them until dying of an unexpected heart attack last December. Lucy’s room is still not cleaned out. During one attempt at clearing out some of her things, Willowdean finds something she never expected, a blank Miss Teen Blue Bonnet form. Her mother was a winner back in the 90s, which she never lets Willowdean forget, but Lucy was overweight and supposedly detested the pageant as much as Willowdean. Shortly after finding the form, Willowdean decides to do what Lucy never did and enters the pageant herself.

Willowdean does not expect that when she enters the pageant, she will have followers. Millie Michalchuk, a happy-go-lucky girl significantly larger than Willowdean, decides to fulfill her dream of participating in the pageant and convinces two other frequently bullied girls, Amanda and Hannah, to do so as well. Willowdean does not want to be the reason that these girls get bullied even more and wishes that they did not sign up because of her. What bothers her more, though, is that Ellen signed up to do the pageant as well. Ellen meant to be supportive when she joined alongside her best friend, but Willowdean demands that she drop out because Ellen is the perfect pageant contestant and this is supposed to be her thing. Ellen is offended that Willowdean expects that she will not participate, driving her closer to Callie and starting a fight between the two which lasts until the pageant itself.

With the help of Lucy’s memory and her drag queen friends down at The Hideaway, Willowdean, Millie, Amanda, and Hannah practice strutting, sashaying, and quizzing each other on interview questions in preparation for the big day. The only one taking the pageant super seriously is Millie who has always dreamed of being crowned Miss Teen Blue Bonnet. She forged her mother’s signature in order to participate and Willowdean realizes that infiltrating the pageant is about more than just herself. “Dumplin’” leads the four girls on a journey of self-discovery as they explore their individual reasons for entering the competition in the first place. Millie wins her parents’ approval, Amanda finds the confidence to join the soccer team, and Hannah makes her mother proud.

When pageant night is over, Willowdean finally understands that while she may be big, she is valuable and deserves happiness just like smaller, prettier girls do. After months of questioning her worth and denying herself happiness with Bo, she leaves the pageant in her hip-hugging, elegant red dress and heads for Harpy’s to find him.

More summaries and resources for teaching or studying Dumplin'.