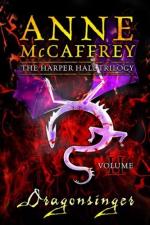 Anne McCaffrey
This Study Guide consists of approximately 37 pages of chapter summaries, quotes, character analysis, themes, and more - everything you need to sharpen your knowledge of Dragonsinger.

"When Menolly, daughter of Yanus Sea Holder, arrived at the Harper Craft Hall, she came in style, aboard a bronze dragon." Chapter 1, p. 3.

"Strange not to have the smell of sea in her nostrils, Menolly thought, for sea and fish odors had dominated all but the last sevenday of her fifteen Turns. How pleasant to realize that she had done with the sea, and fish, forever." Chapter 1, pp. 12-13.

"Menolly tried to sit small, heartily wishing herself between: she was certainly frozen motionless." Chapter 2, p. 21.

"'What I said about change affects the Harper Hall more than any other craft, Menolly, because we are the ones who effect change. Just as we teach with our songs, so we also help people accept new ideas and necessary changes. And for that we need a special kind of harpering.'" Chapter 2, p. 27.

"She had a brief notion of showing him that...