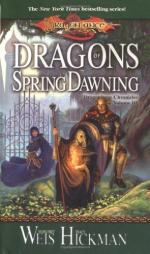 This detailed literature summary also contains Topics for Discussion and a Free Quiz on Dragons of Spring Dawning by Margaret Weis.

Dragons of Spring Dawning by Margaret Weis and Tracy Hickman is the third book of the Dragonlance series. It is a classic fantasy adventure story that is reminiscent of the Lord of the Ring Trilogy by JR Tolkien. A group of friends sets out to stop an evil dark queen from taking over the world.

Tanis, the hero of the book, is a half-elf in love with two women. As the book opens, it is revealed that Tanis has betrayed his friends to spend a few days making love to the enemy, High Lord Kitiara.

He eventually leaves her and rejoins his friends, unknowing that he is being followed by a spy. The friends, Riverwind, Goldmoon, Tika, Caramon and Raistlin, take a boat out of the city to escape the troops that are looking to capture them. The spy tells Kitiara of their boat trip and she follows them on her dragon steed.

The boat is driven by a man named Berem. He is the Everman or a man that cannot die that the Dark Queen is looking for to complete her power. Berem crashes the boat into a whirlpool to escape Kitiara. Raistlin uses his dragon orb to disappear and the friends are rescued by sea elves.

The sea elves take the friends to Kalaman, where they realize that the princess and general of the army, Laurana, has been captured by the dark queen because she was tricked into thinking that Tanis was dying at Kitiara's lair. The friends, now including Tas and Flint, set out to save Laurana. Flint dies of a heart attack along the way and is taken to the afterlife by a wizard named Fizban.

Everyone is taken captive except for Tanis. Kitiara still thinks that he is loyal to her. She makes a deal to spare Laurana's life Tanis pledges his undying loyalty to the Dark Queen and to herself. Tanis agrees, but during the ceremony of Kitiara's crowning as emperor, Tanis steals the crown.

As Tanis is stealing the crown, Berem, Caramon and the newly appeared, healthy, Raistlin reunite the jewel in Berem's chest with the column that he stole it from when he was a young man. The Dark Queen is sealed into a magical jail, where she cannot escape.

Raistlin helps Caramon, Tika and Tas escape from the Dark Queen's castle as it starts to crumble due to the queen being locked up. As the tower crumbles, Tanis and Laurana run from the ceremony room into the hallways. Tanis declares his love to Laurana just as Kitiara catches up with them. Kitiara offers to let Tanis rule the Dark Queen's former armies with her, but he declines. Kitiara lets the two go, telling him she is letting him go because she loves him.

Raistlin has decided that he wants to rule the world with his newly found power and leaves Caramon, telling him that they must live two separate lives now. Afterwards, all of the remaining friends meet on top of a hill outside of the queen's city. They decide that the war is over and that they will all go their separate ways back to their own hometowns.