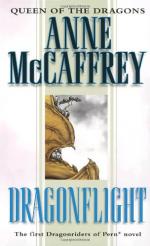 Anne McCaffrey
This Study Guide consists of approximately 74 pages of chapter summaries, quotes, character analysis, themes, and more - everything you need to sharpen your knowledge of Dragonflight Trilogy.

In 1978, Caedmon Publishers released a recording of The White Dragon, read by McCaffrey herself. This was followed in 1983 by Performing Arts Press release of "Menolly's Sea Songs."

As audio-books have become increasingly popular, many of McCaf Dragonriders of Pern novels have been recorded, including: Dragonflight, 6 cassettes/11 hrs. Published by Brilliance.

More summaries and resources for teaching or studying Dragonflight Trilogy.