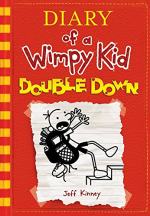 Double Down: Diary of a Wimpy Kid #11 Summary & Study Guide

Jeff Kinney
This Study Guide consists of approximately 30 pages of chapter summaries, quotes, character analysis, themes, and more - everything you need to sharpen your knowledge of Double Down.

Double Down: Diary of a Wimpy Kid #11 Summary & Study Guide includes comprehensive information and analysis to help you understand the book. This study guide contains the following sections:

This detailed literature summary also contains Quotes and a Free Quiz on Double Down: Diary of a Wimpy Kid #11 by Jeff Kinney.

The following version of this book was used to create this study guide: Kinney, Jeff. Diary of a Wimpy Kid: Double Down. Amulet Books/Abrams, 2016.

The eleventh book in Kinney’s Wimpy Kid series, the young adult novel Diary of a Wimpy Kid: Double Down follows middle-schooler Greg Kinney on his humorous experiences that he encounters while being forced by his mom to spend less time on video games and more time on being creative.

It is October, and Greg and the kids at school are all looking forward to Halloween, including Mariana Mendoza’s forthcoming Halloween party. Mariana gives legendary parties, and Greg cannot wait to go. At the same time, the school hosts its autumn book fair. Greg’s Mom gives him money to buy books – but instead, Greg buys things like pens that can write under water. This annoys Mom, who forces Greg to bring everything back to exchange for actual books. Greg opts to go with a handful of books from the Spineticklers horror novel series, which are very popular among everyone at school. Mom is disappointed yet again, having hoped Greg would have gone with books more challenging. Mom herself has returned to college to get her master’s degree, and she is very happy having her mind challenged and learning new things. She decides that both her older sons – Greg and Rodrick – should get away from television and video games to apply their minds in creative ways in the hopes of challenging themselves and discovering new talents.

From the start, things begin to backfire on Greg. Greg’s Mom sets up a get-together with a kid named Maddox, who lives in a rural area, does not watch television, and builds things with Legos. Mom hopes Maddox will be a good role model. Greg is excited about the prospect of Legos, but Maddox will not let Greg touch any of his completed models – and then accuses Greg of stealing when a Lego accidentally gets stuck to Greg’s elbow. When Greg’s Mom brings Greg to college for a visit, he decides to pretend to read a psychology book to fit in. A gorgeous college girl asks Greg to help her study, and Greg agrees. He spends all night cramming for the tutoring session the next day, actually learning about psychology – only to learn the girl has a boyfriend. When Greg learns that Mariana’s party will only be open to kids in the school band, Greg begs his parents to let him join. They agree, but do not know why Greg is so anxious to play an instrument.

When Greg learns that Mariana will only be invited the band’s woodwind section, he forces his best friend, Rowley, who plays an instrument, to change his costume to that of a two-headed monster so Greg will have to be allowed into the party. Greg’s Mom crashes the party by bringing along party games – which everyone loves. The night of the autumn band concert, Greg and Rowley accidentally get locked off-stage, and are discovered later by Greg’s dad who thinks they have been goofing off.

Greg ultimately decides that he and Rowley will make a homemade horror movie using gummy worms as monsters. However, putting the gummy worms in the yard attracts angry migrating geese, who trap Greg and Rowley in the house. When Greg and Rowley go into the basement to retrieve a wolf mask to scare the geese away, they accidentally set off an old Halloween decoration – an electronic witch – which scares Rowley so bad he runs outside and climbs a tree. The fire department must get Rowley down, which attracts the local news station. Rowley becomes a local celebrity, but never mentions Greg in the interviews. Greg is angry, because he knows he is the one who made Rowley famous.

More summaries and resources for teaching or studying Double Down: Diary of a Wimpy Kid #11.