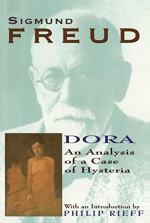 In the case history, the jewel-case symbolizes female genitalia - Freud writes, a common expression in German. As a box meant to contain jewelry, it signifies the vagina, and the act of sexual intercourse. The jewel-case occurs metaphorically in Dora’s dream, when it burns in the fire, despite her mother’s attempts to save it. Freud analyzes this to mean that Dora is worried that her jewel-case, i.e. her virginity, is under threat by Herr K. Freud also connects the jewel-case to the wetness of intercourse, writing that Dora’s mother’s obsessiveness about cleanliness leads her to reject her father’s “jewel-drops”, as in, making her susceptible to venereal disease.

The reticule, a small handbag that was in fashion in nineteenth century Europe, is also a metaphor for female genitalia. Like the jewel-case, it is a small self-contained pouch that it...