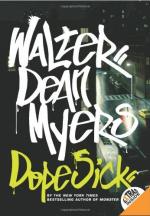 Dope Sick is a novel by acclaimed writer Walter Dean Myers. In this novel, Lil J is running from the police because he has been involved in a drug deal that ended with the shooting of an undercover cop. Lil J's partner in crime, Rico, has told police that Lil J is the shooter. This leaves Lil J convinced that his life is over as he knows it. However, when Lil J hides in an abandoned apartment building, he meets a man named Kelly who suggests that he might be able to go back and change something about his life, to prevent him from facing life in prison as a cop killer. Dope Sick is a novel about a disadvantaged life and the choices made that can lead to prosperity or prison.

Lil J is shot in the arm and hurting. As he walks on the street, a cop takes notice of him. Lil J runs away and takes refuge inside an abandoned apartment building. Lil J wants to make his way to the roof, thinking he could out wait the cops there. Lil J is a wanted man, having been involved in a drug deal gone wrong the day before that ended in the shooting of an undercover cop. Lil J's partner, Rico, has already been picked up by police and he has fingered Lil J as the shooter even though Rico is the one who pulled the trigger. For this reason, Lil J knows that his future is pretty much set in stone unless he can somehow escape the net the police have cast for him.

Lil J is unable to open the door to the roof in the abandoned building. He retreats to an apartment a floor below where he hears the noise of a television. Inside the room, he meets a man named Kelly who appears to have some sort of special television that allows him to show Lil J's flight from the police just moments before. Kelly asks Lil J what one thing he would change about his past in order to avoid the mess he is now facing. Lil J insists that he would change what happened in the drug bust. Kelly shows Lil J a scene on the television that appears to be the future. It shows Lil J on the roof of that very building, preparing to commit suicide as the police storm the building.

Kelly begins asking Lil J questions about his past. Reluctant at first, Lil J finally tells Kelly about the drug bust and how it went wrong when he realized there was something not quite right about the man buying the drugs from them. Rico, who had been high on drugs siphoned off of the product they were selling, had gone back and shot the man, whom they had discovered was a cop, after he and Lil J were already free and able to walk away. Then, as they fled the area, another undercover cop in the yard of the building where the deal had gone down shot at them, hitting Lil J in the arm.

Kelly asks Lil J repeatedly if he is a drug user and Lil J finally admits that he has been using drugs for a while. Then Lil J tells Kelly about his girlfriend, Lauryn, and the child they have together. Lil J is happy about the baby and willing to be a father to him, but Lauryn's mother will not allow Lil J in her apartment, effectively keeping him from seeing the child. Not only this, but Lauryn's mother is trying to marry her daughter off to an older man who has a good job. It seems Lauryn understands her mother's efforts and is contemplating going along with them.

Lil J then tells Kelly how he spent time in jail in Houston for a botched attempt to rob a convenience store with Rico. Lil J also talks about Lauryn's unhappiness with his drug problem and how the alcoholism of Lil J's mother has had a profound effect on his life. In the end, Kelly pushes Lil J to make a decision about what one thing he would change in his life. When Lil J continues to insist he would only change the drug deal, Kelly suddenly fires on the cops in the street below them and rushes out the front door, getting himself killed in a gunfight with police. Lil J is suddenly free to go home and continue his life.