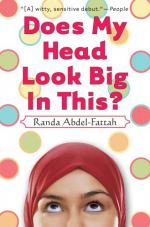 Does My Head Look Big In This? Summary & Study Guide

Randa Abdel-fattah
This Study Guide consists of approximately 54 pages of chapter summaries, quotes, character analysis, themes, and more - everything you need to sharpen your knowledge of Does My Head Look Big In This?.

Does My Head Look Big In This? Summary & Study Guide Description

Does My Head Look Big In This? Summary & Study Guide includes comprehensive information and analysis to help you understand the book. This study guide contains the following sections:

This detailed literature summary also contains Quotes and a Free Quiz on Does My Head Look Big In This? by Randa Abdel-fattah.

The following version of the book was used to create this study guide: Abdel- Fattah, Randa. Does My Head Look Big in This? Scholastic Children's Books, London, 2014. Kindle AZW file. (Note: The novel was first published in Australia by Pan Macmillan Australia Pty Ltd. in 2005.)

Amal Mohamed Nasrullah Abdel-Hakim is a teenage girl who was born in Australia, but she sometimes feels she is not welcome in her native country because of her Muslim faith. Amal has never been comfortable showing the level of her religious feelings by wearing the hajib outside of the confines of her religious school and religious gatherings. She comes to realize that her connection to God is stronger when she wears the hajib all the time. After making that decision, Amal must deal with her parents' concern, the curiosity, and animosity of her friends, and her own determination. During the weeks after her decision, Amal realizes that the people who object only make her more determined to continue wearing the hajib.

Amal is a typical teenager in many ways. She has friends who attend the private, secular high school she attends, and she has Muslim friends who share her religious views. Her two best friends at school are Simone and Eileen. Simone struggles with her belief that she is overweight, a fear fueled by her mother's constant berating. Simone likes Josh, a boy at school. She is surprised when he shows interest in her. Despite the positive support Eileen and Amal offer, Simone tries everything to lose weight, including taking up smoking. Simone comes to the point that she is willing to accept that Josh likes her and that she is not as overweight as she and her mother believe.

Amal's best friends in the Muslim community are Leila and Yasmeen. Both are devout. Leila wears the hajib full time. She is intelligent and determined to become a lawyer, despite the fact that her mother believes she should marry immediately, give up the idea of a career, and devote herself to a husband and family. When her mother's matchmaking and nagging reach a critical point, Leila runs away from home and stays away for two months. She arrives at Amal's house, at the breaking point because of the horrors of living in a shelter. Amal and Amal's mother, Jamila, help bridge the gap between Leila and her mother, and Leila returns home.

Meanwhile, Amal has begun wearing the hajib all the time and finds she is closer to God because of that decision. She likes a boy at school, Adam. Amal believes that Adam understands that she will be friends and will flirt a little, but that the relationship will go no farther because she believes she is to have no physical contact with anyone until she marries. When Adam wants to kiss Amal, she is upset, believing that Adam has pushed past the boundaries she set up. Amal eventually realizes that she was acting in a way that encouraged Adam, expecting him to know her limits even though she had not acted within those limits herself. Though the situation becomes awkward, Amal and Adam find a new footing for their friendship.

Through it all, Amal has a constant, happy relationship with her parents and discovers what she wants to do for her career. As she settles into a new stage of her life, she is more mature and determined, and she has become more closely connected to her friends, even though they do not share all the same ideals and beliefs.

More summaries and resources for teaching or studying Does My Head Look Big In This?.

Does My Head Look Big In This? from BookRags. (c)2022 BookRags, Inc. All rights reserved.