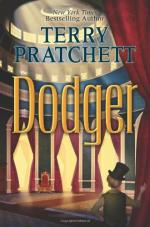 Terry Pratchett
This Study Guide consists of approximately 50 pages of chapter summaries, quotes, character analysis, themes, and more - everything you need to sharpen your knowledge of Dodger.

The novel "Dodger" by Terry Pratchett is a traditional rags to riches story. The soft-hearted Dodger sets into motion for himself a whirlwind of upward mobility when he rescues a girl whom he sees trying to get away from two men one rainy night in London. The girl, who turns out to be a princess, falls in love with Dodger, as he does with her. Dodger uses his street smarts not only to keep Simplicity from having to go back to her abusive husband but also catches the eye of both the London police and other government officials with his unusual talents. For this reason, he is hired to work as a spy for the English government.

Dodger is a tosher, one who scavenges the sewers for lost money and valuables, in the city of London. He believes in the Lady of the Sewers, the deity of the sewer system, and looks forward to the day when she will see fit to grant him a tosheroon, a compact bundle of treasure in the sewers with enough value to set a tosher for life. Dodger doesn't realize he has begun a journey to a different life when he emerges from the sewers one stormy night to save a woman trying to escape a carriage from two men. Dodger rescues the woman and fights off her attackers.

He meets the characters, Charles Dickens and Henry Mayhew, who have witnessed the attack and arrange for the girl to stay at the Mayhew home until she can recover. Dodger learns a bit of Simplicity's story. It was her husband who arranged for her to be hurt so badly, and Dodger makes sure that Simplicity is set up living in a safe place instead of being sent back to her husband.

Charlie has asked Dodger to help him find the men responsible for Simplicity's beating. In the process, Dodger saves the staff of the Morning Chronicle from being robbed, and also helps the London police take Sweeney Todd, a barber who has murdered six men, into custody. For these acts, he is declared a hero and given a reward.

Dodger probably considers his best accomplishment to be his plan to save Simplicity from having to go back to her husband. Because her husband belongs to a royal family in another country, the government of England refuses to give Simplicity amnesty, believing that it will cause bad relations between the countries. Dodger comes up with a plan to fake Simplicity's death so that those who are looking to take her back to her abusive husband will no longer do so, and so that she can live a life of freedom in England, as she desires.

At the conclusion of the novel, Dodger hears the voice of his "granddad" telling him that Simplicity is the tosheroon for which he has been looking. There is more good news for Dodger as he learns that he will not be punished for any of his activities at the - or in connection with Simplicity's "death." Instead, Dodger is knighted by Queen Victoria and is given a job by the government as a spy.

More summaries and resources for teaching or studying Dodger.