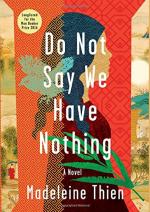 Do Not Say We Have Nothing Summary & Study Guide

Do Not Say We Have Nothing Summary & Study Guide Description

Do Not Say We Have Nothing Summary & Study Guide includes comprehensive information and analysis to help you understand the book. This study guide contains the following sections:

This detailed literature summary also contains Quotes and a Free Quiz on Do Not Say We Have Nothing by Madeleine Thien.

The following edition of this book was used to create the study guide: Thien, Madeleine. Do Not Say We Have Nothing. Knopf Canada, 2016.

Madeleine Thien’s Do Not Say We Have Nothing is divided into two Parts and one Coda. The first Part, Part One, has 8 chapters (Chapters 1-8). The second Part, Part Zero, has 7 chapters, which count down from 7 to 1 (i.e. Chapters 7-1). The first person narrator of the novel is Marie Jiang, a Chinese-Canadian Professor of Mathematics in Vancouver, Canada. The novel alternates between her narration, which includes both the present and the past, and the third person narration of a story told to her by a family friend named Ai-ming.

The novel opens with Marie remembering her father’s suicide in Hong Kong, which occurred shortly after he left her mother when she was ten years old. A few months after his suicide, a young woman named Ai-ming came to live with Marie and her mother in Vancouver. Ai-ming is a political refugee from China, who escaped shortly after the Tiananmen Square massacre. Her father, Sparrow, was a close friend and, as the narrative later reveals, lover of Jiang Kai, Marie’s father.

As Marie and Ai-ming grow closer, Ai-ming tells Marie the story of her family, beginning with her grandmother, Big Mother Knife. Her storytelling was prompted by Marie asking her to read the Book of Records, a collection of notebooks she found among her father’s belongings. Throughout Part One, Marie’s narration in the present and past tense describes her growing friendship with Ai-ming and, later, Ai-ming’s decision to cross the border into the US illegally in hopes of gaining political asylum. Ai-ming disappeared a few years after she goes to the US, and Marie and her mother do not see her again in the novel. After Ai-ming’s disappearance in the 1990s, Marie’s mother was diagnosed with cancer and died a few years after that.

The past third person narrative about Ai-ming’s family describes growing political unrest in China. Big Mother Knife moves to Shanghai to live with her husband, Ba Lute, and their three children, Sparrow (Ai-ming’s father), Da Shan, and Flying Bear. Big Mother Knife’s sister, Swirl, and her husband Wen the Dreamer, who wooed Swirl with his beautiful calligraphy as he copied out the first notebooks of the Book of Records. Swirl and Wen are sent to re-education camps for being class criminals after they are evicted from their home in the countryside, leaving their daughter Zhuli to live with Big Mother Knife and her family in Shanghai. Zhuli and Sparrow grow up and become friends with Kai, Marie’s father, in the Shanghai Conservatory of Music. Wen and Swirl eventually escape their camps, but they never see their daughter again. As the Cultural Revolution begins, Zhuli is brutally beaten several times for the supposed crimes of her parents. She commits suicide in Chapter 7 of Part One. Kai denounces her in an effort to protect Sparrow, and moves to Beijing to join the Beijing Philharmonic. Sparrow retreats into himself after Zhuli’s death, isolating himself emotionally from the outside world.

In Part Zero, Ai-ming’s story becomes the focus and Marie’s narration takes up less space. Marie goes to Hong Kong and then mainland China to find out more information about her father’s death. She encounters many figures from Ai-ming’s story and finds out more about the world her father and Sparrow grew up in. Ai-ming’s story begins to follow Ai-ming’s childhood as Sparrow and his wife Ling grow older. Sparrow has been assigned to a factory and he does not compose anymore. The Cultural Revolution ends and a student movement grows, leading to the climactic penultimate chapter of Part Zero, wherein Sparrow is killed during the Tiananmen Square massacre. Ling, Ai-ming’s mother, commits to finding a new life for Ai-ming. Kai finds out about Sparrow’s death the day after it happens and commits suicide shortly after.

The coda largely describes Marie’s feelings about the narrative she has written. Between her personal reflections, she concludes Ai-ming’s story, describing Ai-ming’s escape from China with the help of Big Mother Knife, Wen, Swirl, and Projectionist Bang, a friend Wen met in his re-education camp. Ai-ming’s story ends with her arrival in Vancouver at Marie and her mother’s house. The novel ends with Marie acknowledging that this story, her own personal Book of Records, is itself fragmented and only a small piece of a larger history.

Do Not Say We Have Nothing from BookRags. (c)2022 BookRags, Inc. All rights reserved.