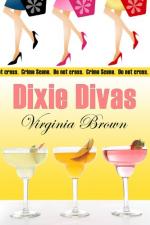 Dixie Divas is a novel by writer Virginia Brown. This novel is the first in a series of novels focusing on a group of Southern women who spend their free time solving crimes. In this first novel, Bitty is accused of killing her husband, State Senator Philip Hollandale. The divas help Bitty hide the body when it shows up at her house, but someone knows the truth and puts the body back. As Trinket, Bitty’s cousin, checks into the case, she finds herself searching all the way back to the Civil War for a motive. Dixie Divas is a fun novel that will keep readers laughing as they try to solve the crime with Trinket and Bitty.

Trinket Truevine has recently gotten a divorce and come home to take care of her elderly parents. Within a few weeks of being home, Trinket finds herself pulled into a murder mystery when her cousin, Bitty, finds her former husband dead on the floor of a home Bitty had been trying to get listed on the historical society’s parade of homes. When Trinket goes to help Bitty wipe her fingerprints off the murder weapon, they discover the body is no longer there.

Bitty decides that her ex was never really dead, and she ignores the whole situation. However, it soon becomes national news that the Senator is missing. When the body shows up in Bitty’s house, Bitty enlists the help of her friends, the Dixie Divas, to help her move it. Unfortunately, the body does not remain where they put it and is discovered again in Bitty’s house, this time by the police.

As Bitty awaits charges for murder, she continues to try to get Mr. Sanders, the owner of The Cedars, to list his house with the historical society. Unfortunately, the he appears to be missing. On a third trip to The Cedars, Trinket is hit over the head and left in the cellar. The local vet rescues her, and this also leads to the discovery of Sanders’ body. Now Trinket and Bitty face charges in this death as well.

Trinket continues to investigate and soon comes across a theory that The Cedars has Union gold buried on its property somewhere. Trinket begins to think that a local girl named Melody killed Sanders to get the gold. However, when Bitty goes missing and Melody is arrested, Trinket learns that Melody had nothing to do with the murder.

Trinket goes with one of the Dixie Divas to meet her lawyer only to discover that this diva has more reason to kill than Melody. Georgie knew where the gold was, and she could not let Sanders sell out and take it all with him. For this reason, Georgie killed Sanders.