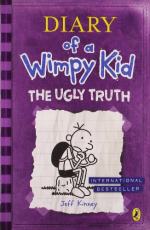 Diary of a Wimpy Kid: The Ugly Truth Summary & Study Guide includes comprehensive information and analysis to help you understand the book. This study guide contains the following sections:

This detailed literature summary also contains Quotes and a Free Quiz on Diary of a Wimpy Kid: The Ugly Truth by Jeff Kinney.

“Diary of a Wimpy Kid: The Ugly Truth” is a young adult novel by Jeff Kinney which follows the growing pains and new experiences Greg Haffley has relating to getting older as he continues middle school. It is the fifth book in Kinney’s “Wimpy Kid” series. When the novel begins, the summer is just ending and Greg has reeling from a fight with best friend Rowley Jefferson. Greg worries about beginning the school year without a best friend, but does his best to remain optimistic. He looks forward to growing older and doing more mature things in life, but other aspects of growing older, such as going through Health class, gross Greg out.

Greg’s mom decides to return to school to further her academic career and to stimulate her mind. She hires a maid named Isabella who Greg dislikes intensely because he suspects her of napping in his bed. Greg, his father, and his brothers Rodrick and Manny must also help out more around the house, and must take care of themselves in many ways that their mother used to. For example, they must now make their own dinner several nights a week and pack their own lunches. They are not always successful at doing this. Likewise, Greg’s dad insists that Greg take on more responsibilities, such as waking himself up every morning. Greg’s dad also begins taking him to an adult dental office, where the humorless Dr. Kagan makes Greg very uncomfortable.

Greg’s parents later go away for a romantic weekend. Though Greg has more responsibilities now than when he was a kid, Grandpa, who has come to watch Greg and his brother while their parents are away, treats Greg as though he is still a little kid. This makes Greg desperate to grow up more. When the school announces a “Lock-In”-–an all-night slumber party-–Greg is excited because girls will be there, too. Unfortunately, most of the kids who attend are guys, and the girls must sleep in the library media room while the guys crash in the auditorium.

On Monday, Greg stays home sick from school, causing his mother to come home early. There, she discovers Isabella hanging out with several other maids, watching TV and eating snacks. Greg’s mom chases them out and fires Isabella. Greg’s mom later decides to put her academic career on hold.

In school, Greg is annoyed to learn that Rowley has gotten a pimple before he has. Rowley says this is evidence of his growing into manhood. Greg wishes he would get a pimple. Greg is then stunned to learn that he and Rowley, along with other younger middle schoolers, have been invited to one of Jordan Jury’s parties. Jordan is one of the most popular kids in his grade, so Greg and the others are thrilled. Greg is annoyed to learn, however, that he must attend his Uncle Gary’s fourth wedding and so cannot attend the party. After the wedding, Greg’s great-grandmother Gammie dispenses some advice to him, reminding him to value his youth and to enjoy it. Greg ultimately decides to do so, and patches up his friendship with Rowley.

More summaries and resources for teaching or studying Diary of a Wimpy Kid: The Ugly Truth.

Diary of a Wimpy Kid: The Ugly Truth from BookRags. (c)2022 BookRags, Inc. All rights reserved.