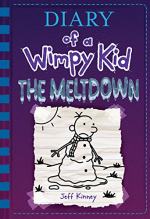 Diary of a Wimpy Kid: The Meltdown Summary & Study Guide

Diary of a Wimpy Kid: The Meltdown Summary & Study Guide includes comprehensive information and analysis to help you understand the book. This study guide contains the following sections:

This detailed literature summary also contains Quotes and a Free Quiz on Diary of a Wimpy Kid: The Meltdown by Jeff Kinney.

The following edition of this book was used to write this study guide: Kinney, Jeff. Diary of a Wimpy Kid: The Meltdown. Amulet Books, 2018. Hardcover.

Diary of a Wimpy Kid: The Meltdown, by Jeff Kinney, is a hybrid novel/graphic novel that is written as the first-person diary entries of the narrator, an unassuming junior high boy named Greg Heffley. On the diary's pages, Greg’s entries are formatted in a typeface that mimics handwriting. Also, Greg’s paragraphs about his life are interspersed with sparse drawings, which depict both Greg’s real-life scenarios and his fantasies and daydreams.

Greg’s diary begins on a Monday in January. It is unseasonably hot for January, which triggers Greg’s concerns about impending global warming. When Greg arrives at school he suddenly remembers that he had forgotten to work on his large project about the country of Malta. The project was due that day. Greg quickly improvises a project out of found materials around school. The shabbiness of his project is briefly hidden when many of the presenters, showing their projects to visiting elementary schoolers, get into a large fight.

The next week, it is cold and snowy. Greg and his best friend Rowley try to think of different ways to find warmth on their long walk home to Upper Surrey Street. They decide to use the spare key to let themselves into Greg’s grandmother’s house, since she is on vacation. After spending the afternoon watching TV, Greg and Rowley are startled when Greg’s mother comes into the house to use the laundry machine. The laundry machine in Greg’s house is broken.

In February, the amount of snow and cold weather intensifies. When Greg accidentally melts the bottom of his boots to the fireplace in his house, he attempts to improvise a pair of snowshoes out of sneakers and pizza boxes, which works poorly. School is let out early on Thursday because of snow, and Greg and Rowley attempt to get on the Whirley Street school bus to avoid walking home. Another student on the bus throws a snowball, after which the bus driver refuses to continue driving. Greg and Rowley are on the wrong bus; so, they are forced to walk home. When they get lost in the forest, they fear that the mythical Goat Man will capture them. Finally, they find their way out of the forest.

On Friday, school is canceled, but Greg must do chores and look after his younger brother Manny instead of watching TV. On Saturday, Greg and Rowley are forced to play outside. They attempt to construct an igloo, but other kids on Surrey Street trample it. Greg’s dad encourages them to bravely fight back. On Sunday, the snow plow has not gone on Greg’s street, and many kids have established their own forts with their own flags.

More summaries and resources for teaching or studying Diary of a Wimpy Kid: The Meltdown.

Diary of a Wimpy Kid: The Meltdown from BookRags. (c)2021 BookRags, Inc. All rights reserved.