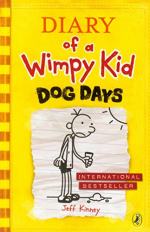 Jeff Kinney
This Study Guide consists of approximately 38 pages of chapter summaries, quotes, character analysis, themes, and more - everything you need to sharpen your knowledge of Diary of a Wimpy Kid.

This detailed literature summary also contains Quotes and a Free Quiz on Diary of a Wimpy Kid: Dog Days by Jeff Kinney.

As summer vacation begins, Greg Heffley keeps a detailed account of his vacation. His parents are frustrated that he spends so much time indoors playing video games. His father is annoyed that he sleeps all through the day as well. Mrs. Heffley starts a book club for the neighborhood boys, but when she doesn’t approve of the books selections the boys choose, the book club dwindles to just Greg and Rowley, and not long after, Rowley backs out of the book club as well. Greg and his friend Rowley begin their summer hanging out at the country club Rowley’s family belong to. They order smoothies and charge them to Mr. Jefferson’s, Rowley’s father, account, but are unaware that they’re racking up a sizeable bill. Eventually, Mr. Jefferson comes to collect the $83 dollars the boys owe.

The boys must find a way to repay the money and decide to start a lawn care service, but have trouble sticking with their marketing strategy. When they finally get a client, the boys have a falling out and Rowley walks off the job, leaving Greg to finish. Greg doesn’t do a good job and his father has to complete the job for him. As a result, Greg is still without the money he owes Mr. Jefferson. During his birthday party, Greg’s mom collects all of his birthday money to pay Mr. Jefferson. Mrs. Heffley takes all three of her sons to the pet store and Greg and his older brother Rodrick both get a pet fish. During a family trip to the water park, Greg’s fish dies. During a conversation with his dad and Grandpa, Mr. Heffley learns that how his dog died when he was a kid. Angry with his own father, Mr. Heffley decides to get the family a dog. The dog takes a liking to Greg, even if Greg is less-than-thrilled with it.

The Heffley family starts hanging out at the public pool and Greg juggles his disgust at the men’s locker room showers and doting on his crush Heather Hills, a high-school aged lifeguard. Meanwhile, Mrs. Heffley and Mrs. Jefferson conspire to reunite their sons. Greg is invited to join the Jeffersons on their summer vacation. The boys reconnect, but the vacation doesn’t go swimmingly. Greg is bored from the lack of television and video games and sends an email from Mr. Jefferson’s laptop to his mother that he needs to get out of there. His mother thinks the email is from Mr. Jefferson and Greg is found out. Instead of getting angry, Mr. Jefferson takes the family to the boardwalk where Greg can finally fulfill his wish to ride the Cranium Shaker. After he spends all of his money on carnival games, Greg is able to go on the ride. It proves too much for him and nearly makes him sick. Afterwards, Greg and Rowley harass some teenagers and later some smaller kids with a dollar bill prank that Rodrick taught Greg. When Mr. Jefferson learns of their actions, he sends Greg home early from the vacation. Greg later mistakes a plan for Greg and his father to bond for the family trying to get rid of Greg. Father and son make amends over their mutual hatred of a comic and Greg’s mother gives him a photo album showing Greg he had a better summer vacation than he might think.

More summaries and resources for teaching or studying Diary of a Wimpy Kid: Dog Days.