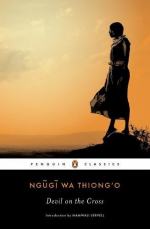 Devil on the Cross Summary & Study Guide includes comprehensive information and analysis to help you understand the book. This study guide contains the following sections:

This detailed literature summary also contains Quotes and a Free Quiz on Devil on the Cross by Ngugi wa Thiong'o.

The following version of the book was used to create this study guide: Ngũgĩ, wa Thiong'o. Devil on the Cross. Heinemann, 1987.

Originally published in the author’s native language of Gikuyu as Caitaani mũtharaba-Inĩ, the author focuses on the corrupting influences of international money and culture on Kenya following its independence. The novel opens with the narrator accepting his duty to tell a sad, perhaps shameful, story of an incident in Ilmorog.

In Chapter Two, the novel introduces the reader to its protagonist: Jacinta Warĩĩnga, a woman who has recently lost her secretarial job and boyfriend. When she attempts to kill herself, the man who rescues her hands her an invitation to the “Devil’s Feast” in her parents’ hometown, Ilmorog. She takes a matatũ to Ilmorog. The driver is Mwaũra, who idolizes money. The passengers include Gatuĩria, a foreign-educated African Studies professor; Wangarĩ, a rural peasant woman; Mũturi, a worker; and Mwĩreri wa Mũkiraaĩ, a businessman. Together, they decide to attend the Devil’s Feast.

At the Devil’s Feast, local Kenyan elites from the Organization for Modern Theft and Robbery in Ilmorog compete to be chosen as disciples to a foreign delegation of businessmen. During the competition, they boast about their various schemes and swindles, through which they have profited enormously off the labor of the poor and working classes. General discord breaks out when Mwĩreri wa Mũkiraaĩ suggests that they kick the foreigners out in order to better consolidate their power and wealth.

Although Warĩĩnga and Gatuĩria agree to remain as observrers, Mũturi and Wangarĩ are disgusted by these events and plot to bring the police to arrest these thieves and robbers. However, when they do so, the police arrest Wangarĩ rather than the guests at the Devil’s Feast. Wangarĩ is taken away, and Mũturi leads a march of irate Ilmorog students, workers, intellectuals, and peasants towards the cave. The businessmen all escape.

Two years pass. Warĩĩnga and Gatuĩria are engaged. Warĩĩnga is now an engineer, while Gatuĩria has completed his musical composition honoring Kenya’s national history and culture. When Gatuĩria takes Warĩĩnga to a tea party at his parents’ house, Warĩĩnga discovers that Gatuĩria’s father is the same “Rich Old Man” who once impregnated her and left her. Upset and determined not to let these elites continue to abuse her, Warĩĩnga shoots the Rich Old Man and a number of the other guests in attendance. These guests were all participants in the Devil’s Feast. While Gatuĩria stands, unsure of what to do, Warĩĩnga strides out of the party.

Devil on the Cross from BookRags. (c)2022 BookRags, Inc. All rights reserved.