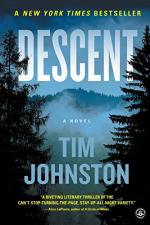 Johnston, Tim
This Study Guide consists of approximately 40 pages of chapter summaries, quotes, character analysis, themes, and more - everything you need to sharpen your knowledge of Descent.

This detailed literature summary also contains Quotes and a Free Quiz on Descent by Johnston, Tim.

The following version of this book was used to create this study guide: Johnston, Tim. Descent. Chapel Hill: Algonquin Books, 2015.

The novel opens in the summer in the Rocky Mountains, where the Courtland family is on vacation. When not on vacation, the Courtlands reside in Wisconsin. Grant and Angela Courtland are married and have two children: 18-year-old Caitlin and 16-year-old Sean. Caitlin is a star track athlete and will be attending college in the fall. One day during the vacation, Sean and Caitlin go out to ride bikes together on a road along the Rocky Mountains. A car hits Sean, and then the man driving the car kidnaps Caitlin. Sean suffers a permanent leg injury. On the same day of the kidnapping, Angela discovers that Grant has been having an extramarital affair. Sean and Angela return to the Courtlands’ home in Wisconsin, and Grant remains in Colorado to help search for Caitlin. A year later, Grant is still in Colorado, staying with an old widower named Emmet. Meanwhile, in Wisconsin, Angela is living alone and is still struggling with the emotional consequences of Caitlin’s disappearance and Grant’s affair.

Emmet’s son Billy, who is in his twenties, eventually moves into Emmet’s house as well. Billy’s demeanor seems to be generally mean and cruel. Meanwhile, Sean, now 17 years old, has begun a relatively directionless existence. He spends his days driving aimlessly around the country. One day, in Nebraska, Sean picks up a hitchhiker named Reed Lester. Later, Sean and Reed ward off two men in an alley who are raping a young woman. Unfortunately, Sean is suspected of being the rapist, and he is arrested. He is soon cleared and released. Grant picks up Sean from jail and brings him to Colorado. Grant has begun a sexual relationship with a local bartender named Maria Valente. Also, tensions between Grant and Billy seem to be growing. Tension quickly develops between Billy and Sean as well, and they engage in a physical altercation one day. That night, Grant threatens to kill Billy is Billy ever harms any of Grant’s loved ones ever again.

One day, Billy is in a local bar, and he converses with a man there named Steve, whom he has never seen before. Due to a few specific details of things that Steve says, Billy realizes that Steve may likely be Caitlin’s kidnapper. As Steve drives away from the bar, Billy covertly him in his truck. He follows the man all the way to a secluded cabin in the woods. Billy contacts the local sheriff before approaching the cabin on foot. Caitlin is chained up in the cabin. Billy and Steve mortally wound each other, and Caitlin is able to escape by cutting off her foot with an axe. Billy and Steve both die, and the sheriff arrives. The sheriff takes Caitlin to a nearby hospital. The sheriff contacts Grant and Sean, who come to the hospital to be reunited with Caitlin. Angela eventually arrives as well. At the end of the novel, the Courtlands all leave Colorado together, traveling in the direction of their home state of Wisconsin.

More summaries and resources for teaching or studying Descent.