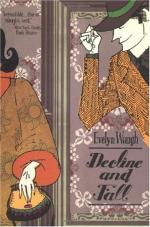 Evelyn Waugh
This Study Guide consists of approximately 28 pages of chapter summaries, quotes, character analysis, themes, and more - everything you need to sharpen your knowledge of Decline and Fall.

This detailed literature summary also contains Topics for Discussion on Decline and Fall by Evelyn Waugh.

Decline and Fall by Evelyn Waugh is his first novel, published in 1928. It is a fictional work in the social satire genre set in England and Wales in the 1920s. It explores the societal conventions of the time surrounding education, values, marriage, the divisions in social classes, honor, racism, human behavior, and the helplessness of man before the uncontrollable and often inevitable aspects of life.

The plot follows the life and times of the hapless Paul Pennyfeather, a student at Oxford University. He gets caught in the shenanigans of the Bollinger Club and is unable to escape the repercussions of his inadvertent “misdemeanors.” He ends up getting “sent down” –bringing his academic career to a summary halt.

His guardian withdraws his allowance, and denies him shelter under his roof, forcing Paul to accept employment as a schoolteacher at the Llanabba Castle School in North Wales. He settles in with his colleagues, the school routine, and his students, until Dr. Fagan, the headmaster, puts him in charge of a school sports event, causing him some stress and trouble.

During this time he also meets the Honorable Mrs. Margot Beste-Chetwynde, who becomes the object of his affections. Paul accepts an offer to tutor her son, Peter Beste-Chetwynde, over the holidays. Due to his affection for Margot, he refuses an offer of marriage to Dr. Fagan’s eldest daughter. Part 1 ends with the supposed death of Captain Grimes, a fellow teacher, and Paul’s departure from Llanabba Castle.

Paul arrives at King’s Thursday, Mrs. Beste-Chetwynde’s home. In this surreal surrounding, Paul falls hopelessly in love with his hostess. She tempts him to stay by offering him a job helping her with her business interests in South America. He proposes marriage, and they gain the approval of her son, Peter, to move forward with their wedding plans.

Next, the character of Grimes is resurrected and, through a circuitous route, ends up at King’s Thursday looking for a job. In the meantime, Paul gets even more enamored of his future wife by watching Margot, the businesswoman, in action. Three days before their wedding Margot informs him that he needs to travel to Marseilles to sort out some business matters. He goes, and after negotiations with bureaucratic offices and an exchange of money, Paul returns to London on the morning of his wedding. After proposing a toast to “Fortune, a much-maligned lady,” Paul is accosted by officials from Scotland Yard with a warrant for his arrest. Part 2 comes to a close.

Part 3 is an account of Paul’s arrest, trial, and conviction leading to his incarceration in Blackstone Gaol. He receives a visit from Peter who tells him of Margot’s distress at his predicament, assuring him that, short of going to prison herself, she will do all she can to help him—even marrying Maltravers, who has offered Paul’s release if she does so. Paul tells Peter that he would prefer that she wait for him until he is released. He finds solitary confinement refreshing, free from the tumult of daily life, able to mindlessly follow directions. He asks for an extension in solitary, but instead, the prison governor embarks on an experiment for his rehabilitation. The most significant result of these reforms is the murder of Mr. Prendergast by a fellow prisoner.

Paul’s transfer to Egdon Heath, a long-term prison, results in his catching up with Grimes again. He starts receiving inexplicable luxuries while confined to the prison. A letter from Margot is followed by her visit, in which she reveals her sinking optimism, her ostracism from society, having to wind down her business, and her sudden decision to marry Maltravers.

Prison life is enlivened by the escape of Grimes, who rides off into the fog on the warder’s horse, never to be found, presumed dead in the bog. Paul’s release from Egdon Heath comes in the form of instructions from Maltravers to send him to a nursing home for an appendectomy. He ends up at Cliff Place, a nursing home run by Dr. Fagan. He is made to sign a will and meets Dr. Fagan, Alastair Trumpington, and an inebriated surgeon who falsifies Paul’s death certificate. A celebratory dinner later, Paul is seen off to Corfu on Margot’s yacht, “to decide on things.”

A chance meeting with Otto Silenus leads to a discussion on life and the nature of people.

Paul decides to head back to Oxford to study theology in disguise. Back at Scone College, Paul reverts to his previous routine, recognized by no one, pretending to be a distant cousin to his old notorious namesake. The book ends where it began, on a night of a meeting of the Bollinger Club. There, Peter Beste-Chetwynde, now Earl of Pastmaster, is a student at Scone and a member of the Club. He drinks himself to death, telling Paul that he should never have gotten caught up with his family.

More summaries and resources for teaching or studying Decline and Fall.