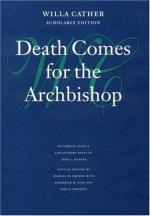 Death Comes for the Archbishop Characters

Willa Cather
This Study Guide consists of approximately 27 pages of chapter summaries, quotes, character analysis, themes, and more - everything you need to sharpen your knowledge of Death Comes for the Archbishop.

Bernard Ducrot is a young priest who comes to Latour's aid in his old age. Ducrot is an admirer of Latour's work in the Southwest, and Latour becomes a fatherly figure to him. Ducrot accompanies Latour when he makes his final trip to Santa Fe to die.

Father Gallegos is the priest in Albuquerque when Latour arrives in New Mexico. Latour hears of his scandalous behavior, all of which is confirmed. Gallegos is robust and lively, favoring parties over serious religious observance. He enjoys dancing all night, playing cards, and accepting the patronage of a local widow. He makes no effort to minister to his people's spiritual lives, nor does he go out to neighboring villages to attend to ceremonial duties for those people. When Latour visits, he pretends to have an injury to his foot, even though he spent all night dancing. He does...

More summaries and resources for teaching or studying Death Comes for the Archbishop.

Death Comes for the Archbishop from Gale. ©2005-2006 Thomson Gale, a part of the Thomson Corporation. All rights reserved.