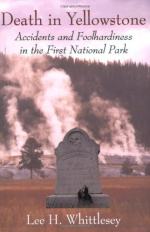 Plot Summary
+Chapters Summary and Analysis
Introduction, Chapters 1-2, Hold Fast to Your Children: Death in Hot Water, 'These Animals Are Not Real': The Myth That Can Kill You!
Chapter 3, Human Deaths from Bears and How to Keep Them From Happening
Chapters 4-10,
Chapters 11-14, Fatal Attraction: Deaths From Falls, Deaths From Forest Fires: Smoke Chasing Can Kill, The Gloom of Earthquakes: Shaky Breaky Park, Danger in the Water: Deaths From Drowning
Chapters 15-20, Clash of Cultures: Deaths From Indian Battles, A Knockout at Bacon Rind: Deaths From Fights, A Death From Diving, Wild Horses: Deaths From Horse, Wagon, and Stagecoach Incidents, Deaths From Accidental and Self Defense Shootings, Malice in
Chapters 21-25, Powerless in Eden: Deaths From Suicide, Missing and Presumed Dead, Deaths From Gas Stove Explosions and Structural Fires, Deaths From Carbon Monoxide Poisoning, Travel in Wonderland: Death on the Road and in the Air, Conclusion: Pay Attent
Free Quiz
Characters
Objects/Places
Themes
Style
Quotes
Topics for Discussion
Order our Death in Yellowstone: Accidents and Foolhardiness in the First National Park Study Guide

Lee Whittlesey
This Study Guide consists of approximately 23 pages of chapter summaries, quotes, character analysis, themes, and more - everything you need to sharpen your knowledge of Death in Yellowstone.

Death in Yellowstone: Accidents and Foolhardiness in the First National Park Summary & Study Guide includes comprehensive information and analysis to help you understand the book. This study guide contains the following sections:

This detailed literature summary also contains Topics for Discussion and a Free Quiz on Death in Yellowstone: Accidents and Foolhardiness in the First National Park by Lee Whittlesey.

Yellowstone National Park was created by Congress on March 1st, 1872, though it has had American inhabitants, tourists, and travelers for decades prior to that. The park, the first of its kind, is mostly located in Wyoming, but reaches into Montana and Idaho. Organized explorations started in the 1860s and the Army started to administer the park soon thereafter. In 1917, management of the park was given over to the National Park Service. The Park is 3,500 square miles and has a wide range of geological phenomena, such as geysers like Old Faithful, many hot springs, the massive Yellowstone Lake, a volcano, the Yellowstone Caldera, and hundreds of mammals, birds, fish, and reptiles. It may be the most famous national park on earth.

Death in Yellowstone: Accidents and Foolhardiness in the First National Park is about the death and serious injury that has occurred in Yellowstone National Park for as long as there have been records, which extend back to the 1830s. The author, Lee Whittlesey, has thirty-five years of experience in the park, first as a bus tour guide and then as a park ranger. He has an M.A. in history from Montana State University and a J.D. from the University of Oklahoma. As such, he knows the geography, history, and legal background of the park and is able to give a comprehensive picture of the deaths and injuries that occurred there.

Over three hundred people have died according to park-specific causes. The causes range widely, from death by scalding in hot springs, to death from bison and bear goring and death from poisonous plants. Some have been killed by avalanches, some from falls, and some from fires. But these are only 'death by nature'. Deaths by man have come from fights with Native Americans, deaths from diving, deaths from self-defense, deaths from suicide and deaths by plane crash. Whittlesey is an expert story teller who makes all of the death stories he tells vivid.

While some of the stories are somewhat amusing, almost all of them are tragic, some of them terribly so. And many of the stories are quite gruesome. But Whittlesey did not write the book for laughs. As he emphasizes over and over again, nature is not the friend of humanity. People often have an idyllic picture of the wild, almost deliberately ignoring its dangers. They pay no attention to warning signs on hot springs, they get too close to the edge of canyon rims and they feed the bears.

Whittlesey is stunned by the almost constant stupidity of some who come to the park, but he goes most out of his way to condemn those who are not only stupid but those who, when someone gets hurt, blame the park and bring a legal suit. These suits often force the National Park Service to 'sanitize' the park and insulate people from danger rather than leave a wide range of choice and personal responsibility to visitors. This sanitization destroys the wilderness, making the Park less special for everyone.

More summaries and resources for teaching or studying Death in Yellowstone: Accidents and Foolhardiness in the First National Park.

Death in Yellowstone: Accidents and Foolhardiness in the First National Park from BookRags. (c)2022 BookRags, Inc. All rights reserved.