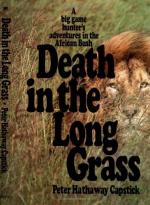 Death in the Long Grass Summary & Study Guide includes comprehensive information and analysis to help you understand the book. This study guide contains the following sections:

This detailed literature summary also contains Topics for Discussion and a Free Quiz on Death in the Long Grass by Peter H. Capstick.

Peter Hathaway Capstick was born in 1940 and died in 1996. He was a famous hunter and author. Born in New Jersey, he attended the University of Virginia and worked on Wall Street briefly before beginning a series of hunting and travel jobs in South and Central America. Later, he traveled to Africa where he held professional hunting licenses in Ethiopia, Zambia, Botswana and Rhodesia (now Zimbabwe). He published widely in magazines during his hunting career and, beginning in 1977, published numerous books about hunting. Capstick, a chain-smoker and heavy drinker, died from complications arising from heart bypass surgery.

In the text, Capstick delivers a variety of hunting adventures and misadventures interspersed with personal commentary regarding many aspects of living and hunting in Africa. The text presents a large amount of social commentary and natural history commentary but is clearly not intended to be scientific in these regards. Capstick is quite at ease within his element and offers opinion, experience, rumor, innuendo, and fact mingled together in an eminently readable and exceptionally enjoyable text. The narrative is decidedly non-chronological and dates are unavailable—in fact, sequencing events is often problematic. Chapters are arranged topically and have no chronological relation to each other except as they occurred in the same perhaps decade of time. Likewise, material within a given chapter is not presented chronologically and there is usually no way for a reader to arrange them in order. This does not detract from the reading experience, however, though it may be at times frustrating.

The chapters are generally arranged in descending order of length but this appears to be an artifact of Capstick's topical organization in descending personal interest and narrative appeal. Thus, the book opens with the longest chapter devoted to lion, moves on to the third-longest and second-longest chapters devoted, respectively, to elephant and leopard, and then continues with a presentation of additional animals often taken during sporting hunting including Cape Buffalo, hippopotamus, crocodile, and rhinoceros. Capstick's vast personal experience dwindles rapidly beyond hippopotamus and the segment on rhinoceros, the shortest chapter in the book, contains little personal observation—by the time Capstick hunted, these animals were generally protected and endangered. The text closes with a short chapter on snakes of many sorts—generally poisonous snakes, and then a grab-bag final chapter considering several different animals likely encountered during an extended African hunt. The strength of the text is clearly found in the first four chapters. Although the observations on hippopotamus and crocodile are interesting, they largely are summarizations of others' experiences and lack the first-hand immediacy found in previous chapters.