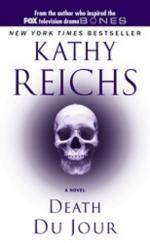 Kathy Reichs
This Study Guide consists of approximately 35 pages of chapter summaries, quotes, character analysis, themes, and more - everything you need to sharpen your knowledge of Death Du Jour.

This detailed literature summary also contains Topics for Discussion and a Free Quiz on Death Du Jour by Kathy Reichs.

Death du Jour is the second novel by award winning author Kathy Reichs. Reichs' heroine, Tempe Brennan, is back attempting to help solve murders in Montreal and mold young minds in Charlotte. In this novel, Tempe helps exhume the skeleton of a nun who is a candidate for sainthood, only to discover stories of the nun's paternity are false. At the same time, Tempe is called to a house fire where she helps excavate the skeleton of a woman who was a victim of a gunshot prior to the fire. This skeleton, and other bodies found at the house, send Tempe and Detective Andrew Ryan in search of callous killers in an investigation that will come too close to home for Tempe. Death du Jour is a forensic crime novel that compares to bestsellers in the genre and holds its own.

Tempe Brennan is in Montreal during a school break to excavate the skeleton of Sister Elisabeth Nicolet in order to provide forensic evidence needed in an application for sainthood the nun's convent is preparing to send the Vatican. Tempe has difficulties finding the skeletal remains but finally has success. Tempe returns home in a snowstorm only to learn that a house fire in St-Jovite's was so bad that it will require her assistance in recovering the victims. As the house is searched in the aftermath of the fire, two bodies are found upstairs and a skeleton in discovered in the basement. Tempe must use all her forensic skills to preserve and excavate the remains of what she later determines is an elderly woman, shot before the fire began.

As Tempe is focusing on Sister Elisabeth, she learns that more bodies were found at the location of the house fire in St-Jovite. Tempe speaks to Detective Ryan and learns that the young family rumored to have been living at the house was found in an outbuilding, stuffed behind a water heater. The family, a young couple and their infant sons, were brutally murdered. Tempe attends the autopsy, heartbroken to see the murdered twins, and assists in preserving a bruise that might later help identify the killer.

Tempe visits the office of Professor Daisy Jeannotte, a religion scholar who might be able to help find information on the birth of Elisabeth Nicolet. While waiting for the professor, Tempe meets Jeannotte's teaching assistant, a skittish young woman who appears to be frightened of incurring the professor's wrath. Tempe will later learn this young woman is Anna Goyette, the niece of Sister Julienne. Tempe speaks to Professor Jeannotte and is told to check the newspapers prior to and after the year of Sister Elisabeth's birth. Later, Professor Jeannotte will contact Tempe and give her some journals written by the uncle of Sister Elisabeth with the hopes that they might mention something helpful.

About this time, Tempe's sister arrives in Montreal to attend a seminar for some counseling course she is taking. Tempe is not thrilled about Harry's arrival, especially when Harry begins flirting with Ryan; therefore, Tempe does not notice Harry's change in behavior in the days before Tempe prepares to return to Charlotte. Once in Charlotte, Tempe focuses on her research into Sister Elisabeth's parentage and her classes at the University of North Carolina. After a few days, however, the St-Jovite returns to Tempe's plate when Ryan convinces her, through a phone call to her boss in Montreal, to join him in Beaufort where he intends to follow up on a possible lead in the case.

Tempe arranges to go to Beaufort with her daughter, Katy, a few days early so they can visit Murtry Island. Murtry is a refuge for monkeys that is run by an old friend of Tempe's, and this friend has agreed to allow Katy to observe the monkeys for a project for one of her classes. While waiting for Katy to complete her work, Tempe relaxes on the island. Unfortunately, life intrudes when one of the monkeys drops a human jaw near the main office. Tempe and her friend follow the monkey and soon stumble upon a shallow grave. Tempe at first refuses to participate in the exhumation but agrees when it becomes clear there is no other option. Tempe finds not one set of remains, but two. Tempe carefully packs them up and sends them to a coroner's office.

Ryan arrives that evening. Tempe introduces Ryan to the local sheriff and visits a private residence where Ryan learned phone calls were made from the house in St-Jovite. This home turns out to be a commune where the leader denies any knowledge of the phone calls or the young couple who were found murdered. Later, however, in town Ryan and Tempe run into one of the young women living at the commune. This young girl appears sympathetic, so Tempe slips her one of her cards hoping she will call. Ryan and Tempe then retire for the day, sharing dinner on the boat where Tempe is staying. One thing leads to another and they find themselves in a romantic embrace that quickly ends when the young woman leaves a message on the answering machine.

Tempe returns to Charlotte while Ryan continues to attempt to find out more about the people at the commune in Beaufort. Kathryn, the young woman from the commune, attempts to call Tempe again, but again Tempe misses the call. At the same time, Tempe examines the skeletal remains recovered on Murtry Island, establishing both gender and approximate time of death. Tempe also discovers mode of death when she realizes small scratches on the bones are consistent with a dog attack. When Ryan calls, Tempe is able to connect these bodies with the murders in St-Jovite. Ryan also has discovered information that connects the commune in Beaufort with the house in St-Jovite. It appears that both are owned by the same person.

Tempe begins doing research into cults, while Ryan continues to research the leader of the commune in Beaufort. When Ryan is finally able to get a warrant for the arrest of the leader, he discovers everyone has disappeared. At the same time, Kathryn visits Tempe and tells her that the leader of her group, a woman Ryan and Tempe have yet to meet, is planning something huge. About that time, Tempe gets a phone call from her nephew informing her that her sister, Harry, has disappeared. Growing concerned, Tempe returns to Montreal.

In Montreal, Tempe encounters Anna Goyette, a young woman she had thought was missing and possibly dead, who tells her about a place where students have been enticed to visit and are brainwashed into joining a cult. Anna escaped, but Tempe is afraid Harry was not so lucky. When Tempe returns home, Professor Jeannotte visits her and asks her to stay away from the cult. Tempe not only refuses but suddenly recalls a farm named Ange Gardien, most likely the location where Harry is being held. Tempe convinces Ryan to visit this place with her despite an ice storm that is beginning to shut down the city. Tempe and Ryan drive to this farm; Ryan insists on informing the local police about their intentions, but Tempe and Ryan are unable to make the drive. Instead, Ryan returns to the farm and approaches it alone. Ryan is shot and Tempe is knocked unconscious.

Tempe wakes in a basement. Tempe is able to get free, only to be confronted by Elle, the leader of the cult. Elle has been planning to commit mass suicide with her people, but it must be a specific number, which is why they forced Harry to remain against her will. As Tempe argues with Elle, she buys time until the cavalry arrives in the disguise of the local police. Tempe and Harry are rescued and return to their respective homes. Tempe invites Ryan to come to Charlotte to recover from his wounds. While waiting for Ryan to arrive, Tempe speaks to Sister Julienne, informing her that Sister Elisabeth's father was a black activist with whom her mother has an affair while traveling in Europe in the year before Elisabeth's death. This fact means that Elisabeth most likely came to the convent against her will, but Sister Julienne assures Tempe that it does not detract from her heroic acts later during the smallpox epidemic and will not change her application for sainthood.