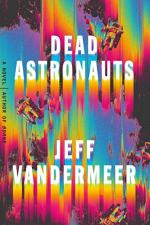 The following version of this book was used to create the guide: VanderMeer, Jeff. Dead Astronauts. VanderMeer Creative, Inc 2019.

In Jeff VanderMeer's Dead Astronauts, a blue fox rules the land, singing prophesies to all of the creatures he controls. The fox's image recedes, and three scavengers appear, by the names of Grayson, Moss, and Chen. Grayson is an ageless black woman, who has traveled in space for centuries. During numerous of Grayson's lives in space, she the entirety of her team. She is constantly plagued by guilt. Once she discovered there were no other lifeforms in space, and that no other planet was habitable, she knew she had to return to her former home, the City. However, the City was completely foreign when she came back. The land was infertile; any sign of life was scarce, and all structures had been turned to rubble. The Company, now in control of the entire terrain, had turned the place to a desert, spotted with receding holding ponds, a polluted river, and stalked by many dangerous and violent creatures. Unsure how to survive, Grayson went west, like any others who managed to escape the Company. While there, she encountered Moss, who she fell in love with at first sight.

Moss is a shape-shifting character, who resists definition of any kind. Like Chen, she was created by Charlie X. Sometimes she presents as a human, but is able to move into almost any form she likes, particularly favoring organic or wild bodies. Of the three companions, Moss is the most tender-hearted. She is even empathetic to their attackers, the blue fox, the duck, and Charlie X. She understands that they are all connected. After she and Grayson determined to return to the City together, in order to save it and prepare a new future, they encountered Chen in a state of despair.

Chen originally came from a land that no longer exists. He too was created by Charlie X. His main power is his ability to perceive the equations of others, a capability which allows him to understand how to defeat them. Chen once worked for the Company, but after becoming so horrified by their activities he fled. Alone in the wild and ravaged terrain, Grayson and Moss approached him. He then joined their mission.

Throughout their travels, the narrative present depicting their tenth return to the City, the three battle the monsters of the land. Often Chen meets and must kill his doubles. Grayson frequently restores his wrecked body to its original form. The three find hiding places, where they attempt to find joy and peace in one another's company. They often imagine lives different from their own, a world that the Company has not destroyed. Throughout their missions, the three repeatedly encounter the fox, duck, fish, and Charlie X. They are never sure which of these creatures is on their side in each new reality. Ultimately, the fox, duck, and Charlie X attack the astronauts, and kill Moss and Chen. Despite her anguish, Grayson continues their mission.

Meanwhile, the leviathan fish swims in its holding ponds, feasting and growing increasingly larger. First identifying as Botch, the fish has lived innumerable lives. In each, the Company has largely disregarded him. Though he longs for the ocean he feels a certain sense of freedom. Later Botch turns to Behemoth, and then finally, to Leviathan. As he moves through lives and versions of himself, he becomes increasingly aware of the Company's power. The Company begins invading his mind and body, forces he cannot escape. Eventually he dies from this pollution; however, a voice from inside himself promises him he will be reborn.

Overlapping with these stories is Charlie X's narrative. As a boy, Charlie X feared his father, the former Company king. After his mother died, Charlie X's father became increasingly cruel, experimenting on his son's mind and body, and forcing him to do the evil work of the Company. Once his father died, the Company made Charlie X implant his father's brain inside the duck. The duck, the narrator reveals, is both Charlie's victim, and his companion. The bird did not always exist in this form, however. Once the bird was a woman. Terrorized by demons, she lit a house and herself on fire, transfiguring into the new reptilian bird.

As these disparate narratives unfold, the lives and identities of each the characters further intertwines. Charlie X realizes he may be the blue fox, who may also be an astronaut. He and the bird realize they both contain parts of the Company they wish they could escape. As the Earth's conditions worsen, the characters become more and more disoriented, losing their sense of time and meaning. At the end of the novel, Grayson reappears on the page, having reached the edge of the City. She finally realizes the world will go on without her, and dies, feeling free.