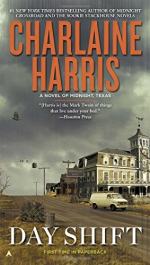 Charlaine Harris
This Study Guide consists of approximately 77 pages of chapter summaries, quotes, character analysis, themes, and more - everything you need to sharpen your knowledge of Day Shift.

The following version of this book was used to create this study guide: Harris, Charlaine. Day Shift. Gollancz, 2015. Kindle Edition.

As the narrative begins--told by an omniscient narrator--the residents of Midnight realize that the old hotel in the town is about to undergo renovation. After further investigation, they discover that it will house elderly people waiting to get into an eldercare residence as well as people who are on contract working for a local company and normal hotel guests. Two people will live there full time. All of the residents agree that this is strange and that they need to find out who is behind the renovation. Manfred conducts some research on the Internet, but only finds that it is backed by a large conglomerate.

Not long afterwards, Manfred goes to Dallas to have face-to-face meetings with some of his clients. He chooses a very elegant hotel in a nice community as he knows that this is the type of place his clients like to come to. When he arrives, he sees Olivia, but follows her signal to ignore her. Later that evening, he goes to dinner and sees her with a nice-looking older couple. As Olivia and the couple depart, he sees the woman give Olivia a card key. The next morning, Manfred gets up to discover that the couple is dead. The police think that it is a murder suicide, but Manfred thinks that Olivia had something to do with the deaths. He speaks to her when he goes to breakfast but does not say anything about his suspicions to the police.

He continues with his work and things go well until he sees Rachel, a longtime client. She comes to him so that she can talk to her deceased husband who knew how to handle her difficult son, Lewis. Manfred realizes that she is not well, but she says that she is okay and tells him that Lewis has been threatening to take her jewelry from her, but she has hidden it. Manfred summons her deceased husband, but instead of talking to her as usually, he takes her with him. When Manfred is himself again, he realizes that Rachel is dead. He calls the police who come to the room and investigate. Her daughter also comes and confirms that Rachel was sick before coming to the meeting. Then, however, Lewis arrives and accuses Manfred of stealing Rachel’s jewelry and possibly having something to do with Rachel’s death.

Just as Manfred’s problems begin, a man drops off his son, putting him in the Rev’s care. The hotel also opens and Midnight’s residents continue to investigate as they try to unearth the hotel’s real purpose. At the same time the media starts coming to town because Manfred’s predicament is now news. The attention that the town is getting is a potential problem for the Rev because the boy who is staying with him is no normal boy. He grows at an astounding rate and the Rev does not want attention to be brought to him. Thus, he enlists Olivia to help Manfred solve his problem so that the media will go away.

Olivia complies and since Manfred’s biggest problem is proving that he did not steal the jewelry, she goes to the house in a disguise to try to find where Rachel could have hidden it. While she is there she meets the maid, Bertha, and sees a young man who is the gardener who she later thinks might be Bertha’s son. She also meets Rachel's daughter and her son Lewis, who she instantly dislikes. She does not find the jewelry, though, so she goes back later that night in order to search the house. When she gets there, however, a man attacks her and makes a call, reporting that he has her. She manages to kill him and escape, taking his cell phone with her. On her way back to her hotel, the man's cell phone rings and she realizes that he was sent by her father, who she considers to be her enemy. During the period of time in which she was in trouble, Manfred had felt that she was in danger and had called Lem. He has been out of town, but happens to be in Dallas when Manfred calls. He goes to help Olivia, but upon finding the man’s dead body, returns to Olivia’s hotel and is there to meet her when she arrives. She is happy to see him.

When she returns, she and Manfred realize that they need to devise another plan. Manfred thinks that Fiji can possibly help because he knows that she is a powerful witch. However, when he and Olivia talk to her, they fail to determine how she can help them get in the house. While, they are there, the boy, Diederik comes by as he has grown more and needs new clothes. One of the elderly residents, Tommy, also comes by. He has noticed the boy’s rapid growth, but promises not to say anything about him. He also tells them about the strange circumstances under which he and his friends have been brought to the hotel. They had been living in a very low quality hotel when they were recruited to come and live in Midnight. However, they are not people with families who are waiting to get into the elderly care residence. There is one elderly person there who does have a grandson and he is there to help take care of his grandfather. After meeting him, Olivia comes up with the idea of using Tommy and his friends to gain entry into the house. The plan involves getting into the library because Manfred has held a séance in which Rachel has told them the approximate location of the jewelry. They also take Barry, the other resident’s grandson with them. He is a telepath and has risked his life to come to Texas as vampires are after him. The trip is successful because Olivia figures out where the jewelry is hidden. They tell Manfred's lawyer and the police receive an anonymous message which allows them to find the jewelry.

While Manfred's case is being resolved, the time for the full moon approaches. When it finally comes, Joe tells everyone that they need to be in by dark while the moon is full. He knows that the Rev and Diederik are weretigers and senses that the boy will turn into one during this period. Everyone follows the orders. On one of the evenings, though, Lewis, and later Bertha, arrive at Manfred’s house just as the weretigers start roaming. Manfred manages to save Lewis, but he cannot save Bertha. Diederik in the form of a weretiger kills her. As it turns out, Bertha is the one who poisoned Rachel because the gardener, her son, is the illegitimate son of Rachel’s husband. Rachel’s husband left him an inheritance, but he does not receive it until Rachel dies and Bertha thought that Rachel might change the will.

Manfred is cleared of all possible charges and everyone now knows that the boy and the Rev are weretigers. The narrative has also revealed that Joe and Chuy are angels. The town members agree to help the Rev take care of Diederik as his father, who is a widower, and the boy faces abuse as he is a young weretiger who others may force to fight. The elderly residents are moved to the eldercare facility and Barry is also gone.

At the end of the novel, the residents, including the sheriff, are at the restaurant. As Olivia is ready to leave, she notices that a man is about to rob the convenient store where Teacher works. The sheriff goes to the store and so does Madonna. She is armed with a shotgun. The two of them handle the situation without the help of the other members of the community.

More summaries and resources for teaching or studying Day Shift.