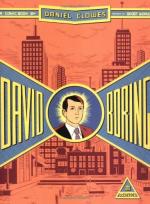 David Boring is a graphic novel by author Daniel Clowes. In this novel, David Boring is a 20 year old living in the city with his best friend, Dot. David narrates his own story as he falls in love, deals with the possibility that the world is coming to an end and tries to get his life back on track when his love leaves him.

As the story unfolds, the readers learn about the many secrets David has. It starts when David is having sex with an actress whom David admits is the sixth woman he's had sex with since moving to the city. David has an obsession with women's butts, so he has a scrapbook of naked women—mostly posing from behind. When his friend, Whitey, comes to the city to visit David, Whitey is killed and David becomes the prime suspect. On the airport bus, on the way to Whitey's funeral, David meets Wanda Kraml.

Wanda pretends to be an innocent young college student. After having unprotected sex with David on their thirteenth date, Wanda disappears taking David's scrapbook with her, but leaving behind the lucky penny necklace David gave her for her graduation. On the same night David finds out Wanda is gone, he is shot by an unidentified person.

When David is released from the hospital, his estranged mother and Dot take him to recover at an island bed and breakfast, Hulligan's Wharf. While staying on the island, David has an affair with his mother's cousin, Dot has an affair with David's married cousin, and two people wind up dead.

When the Hulligan's Wharf owner and David leave the island and wash up on land, they find out that the world hasn't ended after all. David moves on with his life, only to find himself trying to find Wanda again, along with one of Wanda's professor's, Ferdinand Karkes.

By the end of the novel, Dot and David are back at Hulligan's Wharf. They continue to live on the island with Pamela, David's cousin with whom he had an incestuous relationship, and Pamela's baby.