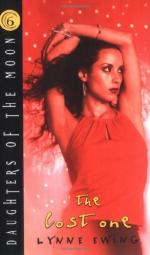 Daughters of the Moon: The Lost One - Book #6 Summary & Study Guide

Lynne Ewing
This Study Guide consists of approximately 28 pages of chapter summaries, quotes, character analysis, themes, and more - everything you need to sharpen your knowledge of Daughters of the Moon.

Daughters of the Moon: The Lost One - Book #6 Summary & Study Guide Description

Daughters of the Moon: The Lost One - Book #6 Summary & Study Guide includes comprehensive information and analysis to help you understand the book. This study guide contains the following sections:

This detailed literature summary also contains Topics for Discussion on Daughters of the Moon: The Lost One - Book #6 by Lynne Ewing.

The Lost One by Lynne Ewing is the sixth in the author's Daughters of the Moon teen fiction series. The book tells the story of Tianna Moore, a teenage girl who wakes up one morning in a strange apartment with no memories, but the sense that she is being pursued by evil forces. As she tries to figure out who she is and who wants to destroy her, she meets classmates Jimena, Vanessa and Serena, who need her help to retrieve their friend Catty from a parallel universe where she is being held captive. After winning a battle with the evil forces of Atrox, Tianna joins the other girls as a Daughter of the Moon.

The book opens with a teenage girl waking up alone in a stark apartment with no memory of who she is or what has happened to her in the past, but she is disheveled and clearly in some kind of trouble. A note in her boot tells her that her name is Tianna Moore and that she believes two men are trying to kill her. Tianna makes her way to La Brea High School, where she has been enrolled for only two days, and begins to meet her classmates. They include Michael, a boy on whom she develops an instant crush, Derek, a boy who seems interested in her, and Vanessa, Serena and Jimena, all of whom wear matching silver charms etched with an image of the moon. The girls had another friend, Catty, who disappeared under mysterious circumstances outside a teen club called Planet Bang.

During a soccer game, Tianna begins to get an inkling that she possesses the power to control objects with her mind, a skill that soon comes in handy when two boys, Mason and Justin, begin pursuing her with an intent to destroy her. As small bits of her memory return, she realizes that they are the two she has been running from and that they have powers of mind control. Vanessa, Serena, and Jimena also seem to have special powers because they know things about her — the location of her apartment, the fact that she has only a few memories, and the fact that she is running from someone — even though Tianna tells no one about her situation.

By sneaking a look at a school computer, Tianna finds her home address, but when she goes there she is surprised that it is not the apartment where she woke up, but rather a large Tudor house. No one is home, but she finds evidence of two other children who live there as well as a room that appears to be hers. Just as she finds a diary she hopes will provide some clues, Justin and Mason arrive and although she is able to escape, they trap her in an alley and she uses her powers of telekinesis to escape.

Eventually a blow to her head brings back Tianna's memories, including the fact that Justin and Mason, followers of the evil Atrox force, murdered her parents and sister some years earlier and she has been in and out of foster homes since then. She also learns that Vanessa, Jimena and Serena are Daughters of the Moon, charged with guarding hope in the world in the name of moon goddess Serene. Tianna helps the girls cross over to the alternate universe and rescue Catty, then all of them join forces to defeat Justin, Mason and the other Atrox followers. As the book draws to a close, Tianna is designated as a Daughter of the Moon and returns to the Tudor house, where she finds a home and family with Mary, her new foster mother, and her two other children.

More summaries and resources for teaching or studying Daughters of the Moon: The Lost One - Book #6.

Daughters of the Moon: The Lost One - Book #6 from BookRags. (c)2022 BookRags, Inc. All rights reserved.