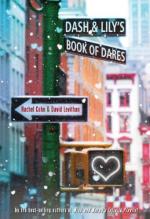 This detailed literature summary also contains Quotes and a Free Quiz on Dash & Lily's Book of Dares by Rachel Cohn.

Dash and Lily’s Book of Dares is the third collaboration between writers Rachel Cohn and David Levithan. In this novel, Dash finds a notebook in his favorite bookstore. The notebook is full of clues that promise to be the beginning of an adventure. Dash completes the clues and leaves a message for the girl who created the notebook. Lily, the creator of the notebook, is surprised to have gotten a response, but she quickly jumps in to have an adventure. For a few days, Lily and Dash exchange the notebook, giving each other fun tasks to do that are both entertaining and humiliating.

At the end of one dare, Lily becomes frightened and forgets to leave the notebook behind, causing an end to the adventure. However, Dash is determined to learn more about Lily, so he uses a boot she left behind as the only clue to find her. When he does, Dash is disappointed by the reality because she is far different from the fantasy.

Lily has grown more courageous through her flirtation with Dash and begins to use that courage in other avenues of her life. She makes friends for the first time in her life and even goes on a date. However, there is something about Dash she cannot forget, so she continues to seek him out even after a mistake has caused him to walk away.

Dash begins to offer Lily a second chance. While they are out walking together, they are both accused of crimes against children and arrested. It gives them a chance to get to know one another better, but it also makes them unwilling celebrities. Again Dash is silent, leaving Lily to think it is over for good. However, he asks her out on a date that proves to be the most romantic one she has ever experienced. Dash and Lily connect on an intimate level and begin a romance that the reader can imagine will last for years to come.