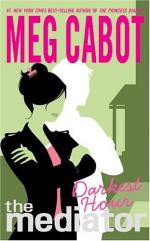 Meg Cabot
This Study Guide consists of approximately 22 pages of chapter summaries, quotes, character analysis, themes, and more - everything you need to sharpen your knowledge of Darkest Hour.

Jack describes an exorcism to Suze, where Maria helped him to get rid of "that hector guy" who Maria said was being really mean to Suze. Suze is in shock as she hangs up the phone. When she hangs up, Father Dominic asks who Jack is and Suze explains about Jack being a mediator too and his exorcism of Jesse. Father Dominic tries to convince Suze that Jesse is a better place, which enrages Suze. Andy comes in to see what the yelling is about and Father Dominic says Suze has asked him to bless the house. Andy goes to Father D's car to retrieve his Bible for him. Suze tells Father D that they have to bring Jesse back and that Father D has to exorcise her so she can save Jesse.

Ironically, the same hands that killed Jesse are...

More summaries and resources for teaching or studying Darkest Hour.