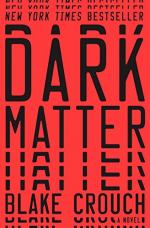 Blake Crouch
This Study Guide consists of approximately 59 pages of chapter summaries, quotes, character analysis, themes, and more - everything you need to sharpen your knowledge of Dark Matter.

This detailed literature summary also contains Quotes and a Free Quiz on Dark Matter: A Novel by Blake Crouch.

NOTE: All citations in this Study Guide refer to the Kindle version of Dark Matter, published July, 26 2016.

If you had a chance to go back and change a decision in your life, would you do it? What might happen if you did? These are the questions author Blake Crouch presents in his science-fiction novel Dark Matter.

Years before, Jason Desson decided to focus his life on family when he learned his girlfriend was pregnant. Though he wonders what his life might have been like if he had been able to continue his research into superposition, Jason does not regret his decision. One day, however, he is forced to face what that life might have been like when he is kidnapped by a strange man who asks if he is happy with his life.

Jason left his family to visit an old college friend even though it was their traditional family night. Ryan Holder was awarded the Pavia Prize for his work in science. During his conversation with Ryan, Jason gets the sense that Ryan is angry with him for concentrating on his family instead of on his career. Ryan accuses Jason of giving up. Jason leaves the bar in anger.

On his way home, Jason is kidnapped by a strange man wearing a geisha mask who sends Jason to a version of reality where Jason is a renowned scientist. Jason has created a way for people to travel through the multiverse but he remembers none of it. The people for whom Jason works have just discovered that something is very wrong with their scientist when Amanda Lucas, another worker from Velocity Laboratories, helps Jason to escape death at their hands when she sneaks him into the box. Together, Jason and Amanda begin exploring the variety of universes, trying to get Jason back to the reality from which he came.

After Jason visits several universes in his search for his real home, he finally arrives in the Chicago he remembers. Unfortunately, several other Jasons, who also believe they are searching for their real lives, have also shown up in this same Chicago. Jason must prove to Daniela and Charlie that he is the real Jason while avoiding the other Jasons who are trying to kill him in their attempt to stake their claim on Daniela.

More summaries and resources for teaching or studying Dark Matter: A Novel .