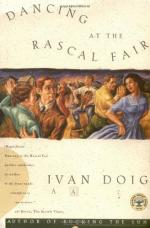 Ivan Doig
This Study Guide consists of approximately 33 pages of chapter summaries, quotes, character analysis, themes, and more - everything you need to sharpen your knowledge of Dancing at the Rascal Fair.

Dancing at the Rascal Fair Summary & Study Guide includes comprehensive information and analysis to help you understand the book. This study guide contains the following sections:

This detailed literature summary also contains Topics for Discussion and a Free Quiz on Dancing at the Rascal Fair by Ivan Doig.

Angus McCaskill and Rob Barclay arrive on a ship bound for America from their native home of Scotland. They plan to go to Montana to find Rob's uncle, Lucas Barclay, who has sent money home to his family each Christmas. The money makes Rob and Angus certain that they can make better lives for themselves by going to America. Once in Helena, Montana, they are unable to locate Lucas and spend a great deal of time searching for him. When the annual money arrives in Scotland, Rob's family forwards the letter along with Lucas's new location - Gros Ventre, Montana. Rob and Angus make their way to Gros Ventre, going part way by the only transportation available, which is freight wagon. Once there, they find that Lucas owns a saloon known as the Medicine Lodge, having given up mining after an accident took both of his hands.

Lucas's live-in mate, Nancy, is part Indian, and Rob is soon smitten with her. Angus, fearing a family fight in the making, plans to leave, but Lucas offers to help the two get homesteads started, including the purchase of sheep, and Angus and Rob move immediately onto the land near Gros Ventre. They establish homesteads and tend the sheep, often struggling to make ends meet. Rob marries a young woman named Judith Findlater and Angus takes a job as a school teacher. When he meets another young school teacher named Anna Ramsay, Angus falls in love, but Anna refuses to marry him immediately, citing the need for them to take some time before making such an important decision. Meanwhile, Rob's younger sister Adair arrives from Scotland, obviously with the hope of marrying Angus. When Anna returns to the valley in the fall, she tells Angus that she's going to marry a horse trader named Isaac Reese. Angus tells Adair that Anna has turned him down and asks Adair to marry him. She agrees and they endure two miscarriages before Adair gives birth to a son, Varick.

Angus's love for Anna never dissipates and when Rob realizes it, he calls Angus on it. The two men fight and Angus holds onto the hope that when Anna's own children are grown, she'll come to him. When Rob can't make Angus stop loving Anna, he tells Varick of the love that Angus has harbored all his life. Varick feels betrayed and spends some time hating Angus, though he eventually comes to an understanding with his father. Varick marries Anna's daughter, Lisbeth.

When Lucas dies, he leaves one thousand, five hundred head of sheep to Angus, Rob and Adair, but with the stipulation that they must tend the business together for three years before selling, unless all three agree to sell. Adair holds out against selling, insisting that Lucas wanted them to keep the sheep. When the third year is drawing to a close, Angus and Rob are no closer to mending their broken friendship than before. After an argument during a feeding time, Rob takes Angus's horse to drive the sheep over the dam of his reservoir and the horse stumbles. Both fall into the water and both drown.

More summaries and resources for teaching or studying Dancing at the Rascal Fair.

Dancing at the Rascal Fair from BookRags. (c)2022 BookRags, Inc. All rights reserved.