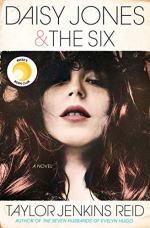 Daisy Jones and the Six Summary & Study Guide includes comprehensive information and analysis to help you understand the book. This study guide contains the following sections:

This detailed literature summary also contains Quotes and a Free Quiz on Daisy Jones and the Six by Taylor Jenkins Reid.

The following version of this book was used to create this study guide: Jenkins Reid, Taylor. Daisy Jones & The Six. New York: Ballantine, 2019.

The novel is narrated in an interview format with members of the 1970s rock band Daisy Jones & The Six, along with their loved ones and associates. It begins in 1965-1972 as Daisy Jones recalls her early teen years. The child of wealthy but inattentive parents, Daisy began sneaking out at night to see rock bands on L.A.'s Sunset Strip. It was here she developed a passion for music and met her lifelong best friend, disco singer Simone Jackson. Simone encouraged Daisy to put her talent for singing and writing lyrics to work, and one night while singing with a boyfriend's band at a club, Daisy was discovered by Hank Allen, who would become her manager. Hank got her a record deal with Runner Records.

Meanwhile, brothers Billy and Graham Dunne were raised by a single mother in Pittsburgh and began playing as a band in high school. They were joined by Pete Loving, bassist, Eddie Loving, guitarist, and Warren Rhodes, drummer. They later added a keyboardist, Karen Sirko, and called themselves the Six. While performing at a wedding, Billy met the future love of his life, Camila. The band visited Los Angeles and played a club where they were discovered by Teddy Price, a producer for Runner Records, who offered them a recording contract.

The Six recorded their first album, then prepared to go on tour, but the night before they left, Camila told Billy she was pregnant. They called a friend who was an ordained minister and got married. On the tour, Billy developed a serious drug/alcohol problem, and even cheated on Camila. She told him he had until their baby's due date to get sober. When he was unable to do this on his own, Teddy Price took him to rehab. Thus Billy missed the birth of his first daughter, Julia. The Six returned to the studio to work on another album, and Teddy suggested they bring in a female singer to do a duet with Billy on one of their songs. They settled on Daisy Jones. Daisy and Billy immediately argued over the song's lyrics, but tried to work together.

The band went on tour with Daisy opening for them, and, just like Billy, she began using drugs heavily. Graham and Karen began sleeping together. The Six asked Daisy to officially join the band, thus becoming Daisy Jones & The Six. Billy and Daisy collaborated on the lyrics for the band's next album, Aurora, often arguing with one another, but also forming a strong and intimate bond. Billy became concerned about Daisy's drug use, and also felt he had to keep his distance from her lest his sobriety be threatened.

Graham and Karen continued seeing each other, but it became increasingly apparent to Karen that he was in love with her and she did not feel the same way. Meanwhile, while working on lyrics in Teddy Price's pool house, Daisy tried to kiss Billy. He fled. The band got together to shoot an album cover, then Daisy went on vacation to Thailand, where she met Nicky, an Italian prince who was an even heavier drug user than she was. The two traveled to Italy and got married. Simone had to fly to Italy and drag Daisy back to L.A. for tour rehearsals.

During an interview with Rolling Stone, Daisy told a journalist about Billy's earlier drug problem. After hearing about this, Billy begged the journalist not to print the story, and gave him a different angle instead: the fact that he supposedly hated Daisy. The article ran and tour ticket sales exploded, as people were excited to see the drama for themselves. The band set out on two tour buses, one for each of its singers, and the two never interacted offstage.

Gradually over the course of the tour, the rift healed and Billy and Daisy began speaking again. Daisy divorced Nicky and decided to get sober. She went to Billy's hotel room to ask for his help, but just as he was going to call a rehab facility for her, the phone rang; Teddy Price had died. Daisy did not go to rehab. Meanwhile, Karen discovered she was pregnant and told Graham she was getting an abortion. He asked her to think it over. She did, but went through with the abortion anyway.

The band played a show at the Chicago Stadium in 1979, and while performing, Billy and Daisy both struggled internally with their romantic feelings for each other. Afterwards, Daisy got drunk and stumbled to her hotel room, and Billy went to the hotel bar. Billy ordered a tequila and tasted it, but was interrupted by a fan, who, realizing what was happening, distracted Billy by asking him about his family, then casually moved the drink away. Afterwards, Billy returned to his hotel room and cried, realizing he had to leave the band to maintain his sobriety and his commitment to Camila. Meanwhile, Daisy was stopped in the hall by Camila, who was holding her daughter Julia. It is revealed that Julia is the author conducting the interviews and writing the book; she vaguely remembers this scene. Camila asked Daisy to leave the band, explaining that Billy would never leave his family, and that Daisy deserved better than pining after a man she could never have. Daisy recalls being touched by Camila's empathy in this moment. She did leave the band, and went directly to rehab. She never drank or used drugs again. Camila passed away before Julia finished writing her book. The band never played together again, but the members went on to live happy and fulfilling lives.

Daisy Jones and the Six from BookRags. (c)2022 BookRags, Inc. All rights reserved.